On December 10th, Chinese manufacturer, Redmi, will release its latest Redmi K30 series. This smartphone will have both 4G and 5G versions as well as a Pro model. However, a recent report online claims that the Pro model will arrive officially in March 2020. If that be the case, we guess the company will probably announce the device but it will hit the market next year. 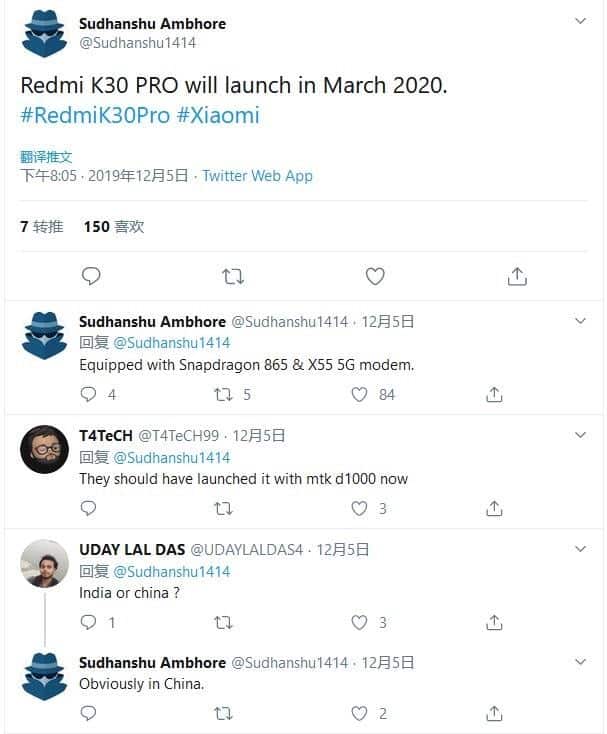 As for the Redmi K30 Pro secs, there are reports that the smartphone will come with a Snapdragon 865 processor + Snapdragon X55 5G baseband. Some netizens ask whether it will be released in India or China; Sudhanshu Ambhore said that it is obviously the Chinese market.

According to Lu Weibing, Xiaomi VP and general manager of the Redmi brand, the Redmi K30 will use a Qualcomm Snapdragon 765G SoC which integrates a Snapdragon X52 5G modem. The Redmi K30 supports SA/NSA 5G dual-mode 5G network and has a downlink peak of 3.7Gbps. At the same time, it uses the fifth-generation Qualcomm AIE artificial intelligence engine. This engine has a Top 5 AI computing power. Other features on this smartphone include a side fingerprint sensor, dual punch-hole front camera, and 12 antenna design.