Huawei’s next-generation flagship is considered to be the P40. And as usual, there will be at least two models – the original variant and the Huawei P40 Pro. The latter is going to win the world due to its powerful hardware. We have already got acquainted with a number of new features it will come with. And today, Huawei France officially tweeted that they will be the first high-end smartphone manufacturer to release graphene batteries. 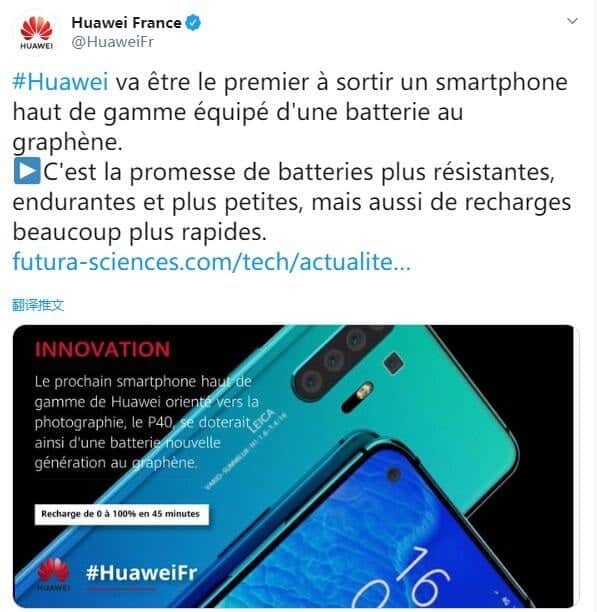 Graphene batteries will bring longer battery life and faster charging speed. By the way, the manufacturer has officially announced the Huawei P40 Pro will sport an enormous 5500mAh battery. So coupled with the graphene technology and Huawei’s own low power consumption technology, it will provide a better endurance. This is crucial for a 5G handset that ‘eats power’ as if it never happened. This technology will also ensure faster charging. The same source claims the input power will reach up to 50W.

Anyways, the graphene battery will not be the only selling point of the Huawei P40 Pro. Particularly, we have heard it will feature a 120Hz screen, which has become a must for current flagship models. For an average user, it won’t be very noticeable. But the higher refresh rate greatly improves the interaction with the device. Not only that, this phone will sport a periscope lens and support 10x optical zoom. So undoubtedly, with the launch of this handset, Huawei will take the smartphone camera performance to the next level. As for software, there are rumors saying that our protagonist will be a dual-OS smartphone, running on both Android and Harmony.

P.S. Though the Huawei P40 Pro is said to be the first coming with the graphene battery, it won’t be the only one. Reportedly, Samsung is working on its own handset with this technology.

Previous Apple Will Release Up To Four 5G iPhones Next Year

Next Meizu 17 With Snapdragon 865 To Debut Next Spring