When other smartphone manufacturers are trying to focus on premium flagship experience, it seems like Nokia has some other plans. In fact, we have only seen a few premium devices this year. After launching Nokia 2.3 – the successor of Nokia 2.2, the smartphone maker is working on yet another budget smartphone, which might be dubbed as Nokia 1.3. A new Nokia smartphone has now surfaced on the internet with model number TA-1213. The smartphone has recently bagged the Bluetooth SIG certification. 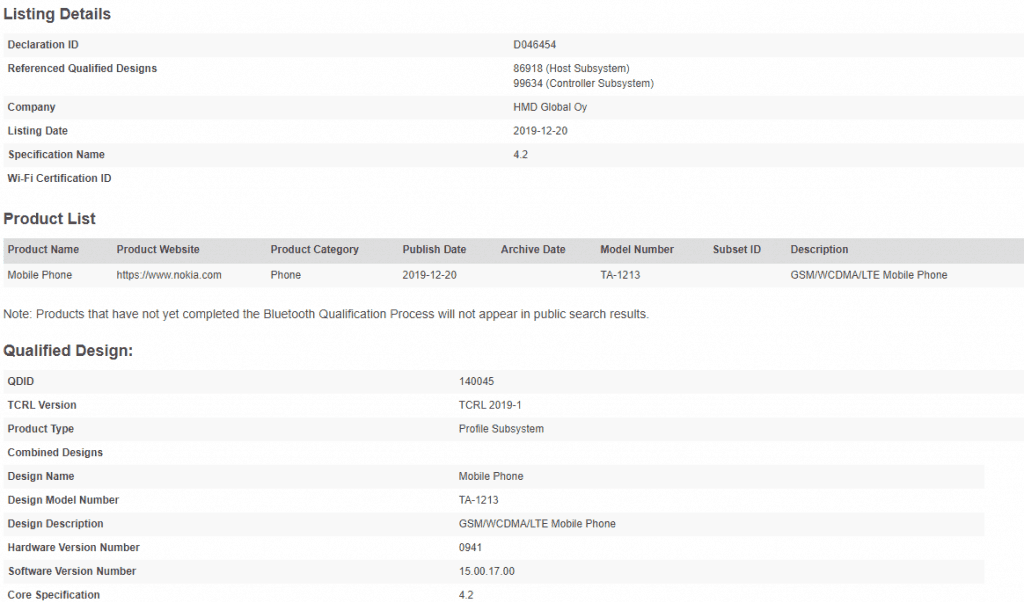 As per the listing, the device is powered by a Qualcomm Snapdragon 2xx series chipset inside. We’re expecting the SoC to be the Snapdragon 215. Furthermore, the device is listed featuring Bluetooth 4.2 for connectivity. Considering the chipset, the new Nokia smartphone might be a low-budget offering similar to Nokia C1 Android Go and Nokia 2.3. The smartphone might come with the Nokia 1.3 moniker making it the successor of Nokia 1 Plus.

As expected, the listing doesn’t reveal anything else about the smartphone. Since this is a budget phone we’re looking at, we’re not expecting anything surprising. Since the device has now received the Bluetooth certification, we should see it popping up on more platforms in the near future.

To recall, Nokia C1 comes packed with 1GB RAM and 16GB internal storage paired with MediaTek quad-core processor. It flaunts a 5.45-inch IPS LCD panel with a resolution of 960×480 pixels. There is a 5MP sensor on the back as well as on the front of the phone. Powered by a 2,500mAh battery, the device runs on Android 9.0 Pie based on the Android Go platform.