Today, it was reported that Huawei applied for the HUAWEI NovaBuds trademark to the EUIPO (European Patent Office) on December 24.

HUAWEI NovaBuds trademark refers to various categories, including virtual reality game augmented headset, smartphone headset, in-ear headset, etc. At present, the trademark is still waiting for review. From the perspective of the patent, HUAWEI NovaBuds should be a true wireless Bluetooth headset. No other information is available for the time being.

However, this is not the first wireless headset of the company. In the past, Huawei has released a few models and all they performed quite well. Say, recently, it announced the Huawei FreeBuds 3 true wireless headset. 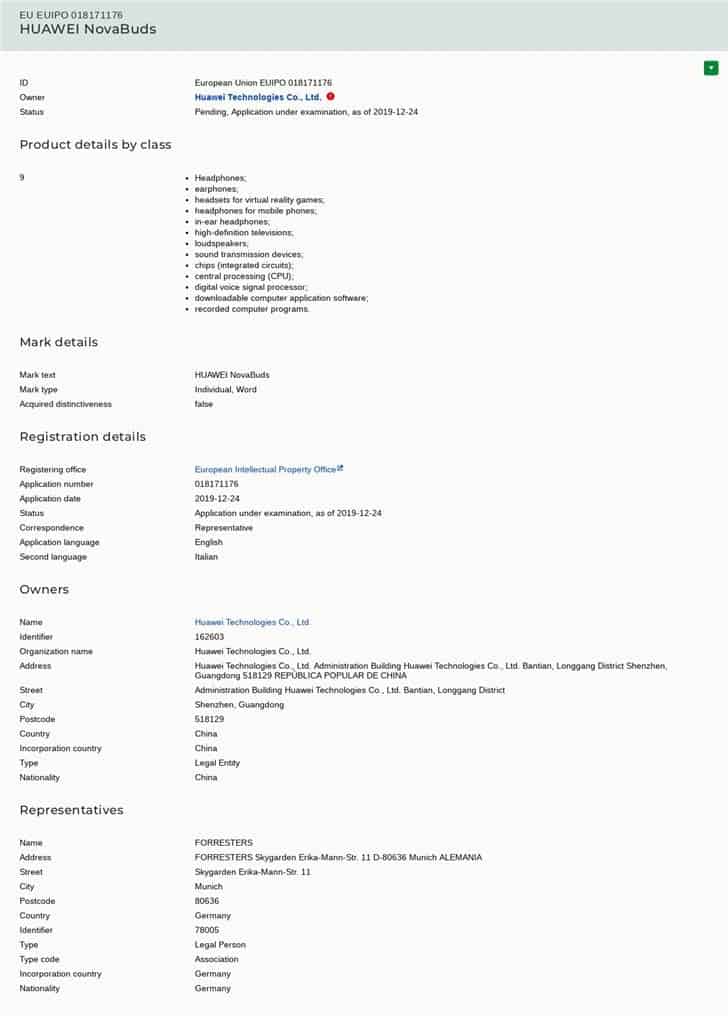 The Kirin A1 chip allows FreeBuds 3 to provide a 30% higher performance than the Apple AirPods. Furthermore, it has 50% lower power consumption, and its package size is 95% of AirPods. Kirin A1 brings a new Bluetooth protocol: BT-UHD. But this standard can be used only when connecting to Huawei phones running EMUI 10.0 or higher. It has a data transfer rate of up to 2.3 Mbps. In comparison, the LDAC codec ‘only’ provides 990 kbps.

It is worth mentioning that Huawei FreeBuds 3 is the world’s first true wireless headset with an open design but also with active noise reduction.

As for the rest of the key features, the FreeBuds 3 comes with a better 190ms delay and Qi wireless charging. Each headset comes with a 30mAh battery that provides 4 hours of playback. In addition, the charging box provides approximately 20 hours of total playback time. Huawei FreeBuds 3 is available in carbon black, ceramic white, and red.