According to recent reports, the Honor 9X series commenced the EMUI 10 public beta upgrade a few days ago. Owners of this series who want to try out the beta can follow the steps below for the update. Go to the Fan Club App and in the upper right corner of the forum click on “EMUI zone” to upgrade. This upgrade only supports mobile registration. You may also need to go to the App Store to upgrade the Fan Club App version. The launch of the public beta upgrade of the EMUI 10 system will bring updates such as GPU Turbo, Link Turbo, Ark Compiler, and Connected Connect for Honor 9X series phones. 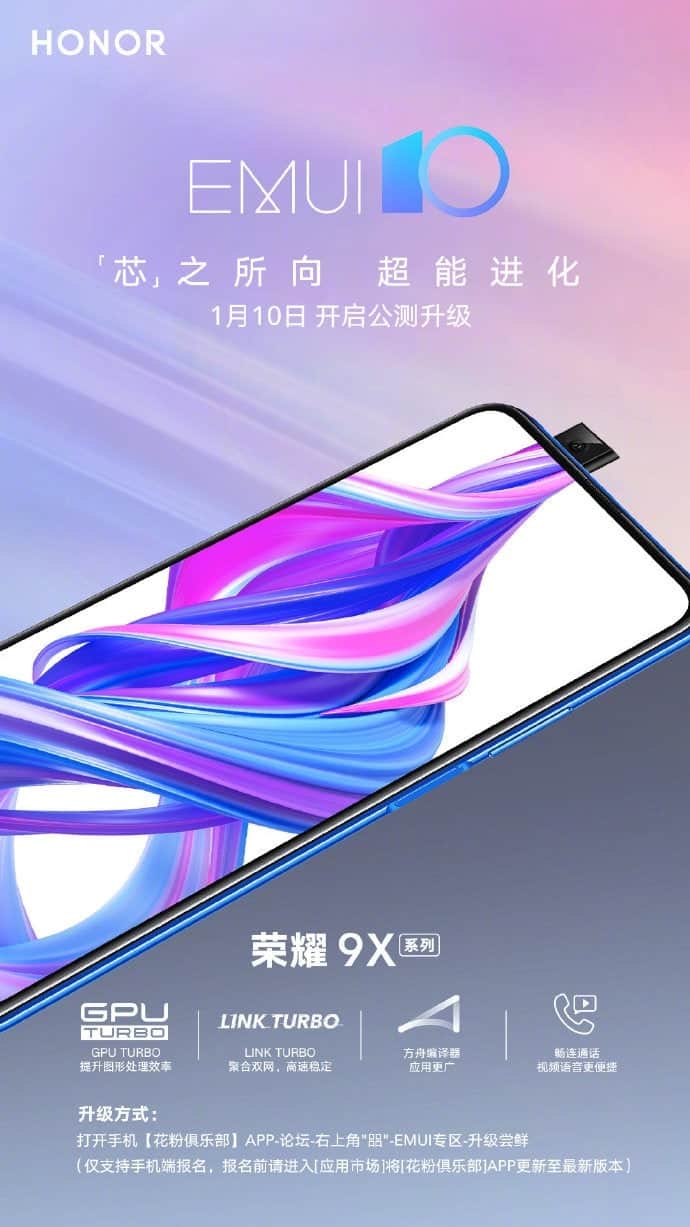 The new internal beta is available on Honor 9X and 9X Pro. As of now, many Huawei phones run on Android 10. However, these smartphones do not use its internal system. The company has been working on its take on Android for a long time and developed EMUI or Emotion UI to power up its devices. The Honor 9X series consists of Honor 9X Pro (July 2019) and Honor 9X (October 2019). These devices will now get the company’s self-developed EMUI 10 beta update.

Honor 9X series comes with a 6.59-inch full-screen, a pop front camera and a screen ratio of 92%. These smartphones also use an on-screen fingerprint sensor. These devices run on the 7nm Kirin 810 chip along with a 4000 mAh battery. In terms of cameras, the Honor 9X has 48MP dual rear cameras; Honor 9X PRO has three rear cameras, including 48MP main camera, 8MP wide-angle lens and 2MP pixel depth of field lens. The smartphones also come with AIS Super Night View 2.0, Gaming+, GPU Turbo 3.0, The NINE liquid cooling, UFS 2.1 storage (available only for 256GB variant). The Honor 9X series phones were previously powered by EMUI 9.1 based on Android 9 Pie. However, they will now get the EMUI 10 internal update. Looking at Huawei’s pattern with updates, there are high expectations for this update.

Previous Huawei P20 Pro EMUI 10 update will roll out in India this month, Europe in March

Next Mysterious smartphone with a 256MP camera hit the web