Two days ago Huawei released the Android 10-based EMUI 10 stable update for the Y9 Prime (2019) in India. Now, the company announced that the next smartphone in line to receive the stable software in the country is the last year’s flagship Huawei P20 Pro. 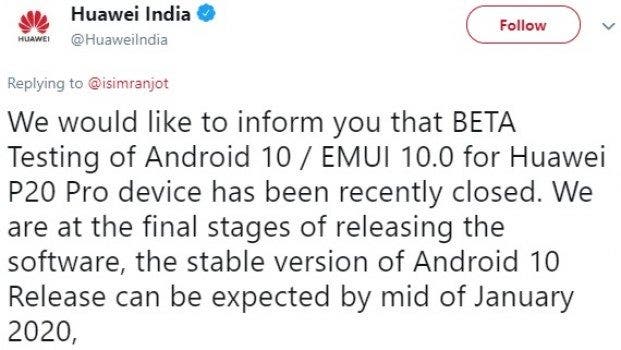 The company replied to a user on Twitter, revealing that Huawei’s Indian branch will roll out the stable version of EMUI 10 for the P20 Pro during this month. However, the company didn’t reveal the exact date of the rollout but said that users can expect it in mid-January. That basically means that the owners of this flagship can start to receive the firmware during this week, or early in the next.

The Indian owners will be happy with the Android 10-based firmware until the end of this month. Unfortunately, European customers will have to wait more. According to Huawei’s German branch, the rollout of EMUI 10 for the aforementioned device will being in March. Moreover, it will take up to four weeks to cover all eligible units.

EMUI 10 brings a ton of improvements and visual refreshments to the eligible smartphones. There’s a new System-Wide dark theme that covers a lot of system applications. Moreover, the company has introduced a new interface with animations that resemble a magazine. The new update will bring a whole new experience for the Huawei P20 Pro. It still is one of the company’s most succesful smartphones to date. For that reason, it deserves all support Huawei can give.