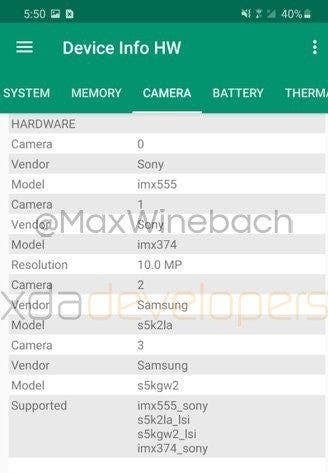 According to the latest report from XDA developer, the Samsung Galaxy S20+ supports 8K / 30 frames of video recording. Both the front and rear cameras support 4K / 60 frames of video recording and video stabilization (may include OIS and EIS). However, the Galaxy S20+ does not seem to support 4K 60fps HDR videos. Note that the 8K 30fps video also does not support HDR.

The Galaxy S20+ will probably use Sony’s new 12MP 1.8μm IMX 555, a sensor that has not yet been released. In addition, this smartphone will use a quad-rear camera setup. According to speculations, Samsung’s 108MP camera will only appear on the Galaxy S20 Ultra.

The device comes with a 6.7-inch Infinity-O sAMOLED screen and it has 4 cameras at the rear. The camera configuration may include the main camera, ultra-wide-angle, telephoto, and macro lenses. According to SamMobile, the Samsung Galaxy S20 will be the first Samsung phone to come with a 120Hz screen.