While Sony is working on its next-generation PlayStation 5, Microsoft is also getting its next console dubbed Xbox Series X ready. A couple of days ago, we saw the very first live images of the gaming console. Well, we now have a key piece of information on the upcoming Microsoft’s console. If the recent emerging report is to be believed, the Xbox Series X console will feature a PS5019-E19 Master SSD storage. The best thing about this all-new SSD is the fact that it is a DRAM-less PCIe 4.0 M.2 storage device. 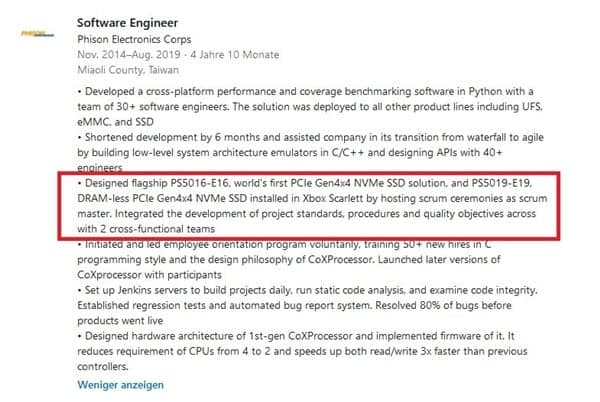 As per the report, the flash memory controller will support up to 2TB of storage capacity. This means that we will see Xbox Series X with up to 2TB of storage option. Theoretically, this storage can deliver up to 3.75GB/sec sequential speed and writes. It can also hit up to 440K IOPS read and 500K IOPS writes. Considering this speed, the new storage is 36 times faster than the Xbox One hard drivers that rotate at a speed of 5400 RPM. For those who’re unaware, the latter has average speed of 100MB/sec read & writes. The all-new E19 Master is able to hit these thresholds by using PCIe 4.0 across 4x lanes. It is a 28nm chip that comes with an ARM Cortex R5 CPU.

It is still quite early to comment on the actual speed of Xbox Series X gaming consoles. Just because the E19 Master is able to hit these speeds does not mean the Xbox X’s SSD actually will. With that said, an upgraded SSD will definitely result in improved performance and faster game loading time. Furthermore, Microsoft is also focussing on backward compatibility, support for optical drives, support for VR and handheld mode. We’re expecting more pieces of information to come forward in the coming days. It would be interesting to see how well the Microsoft’s offering performs when compared with Sony’s upcoming PlayStation 5 console.