A couple days back we reported about a render allegedly portraying the upcoming Motorola Edge+. Today, that rumor gets somewhat confirmed by a benchmark just surfaced online. 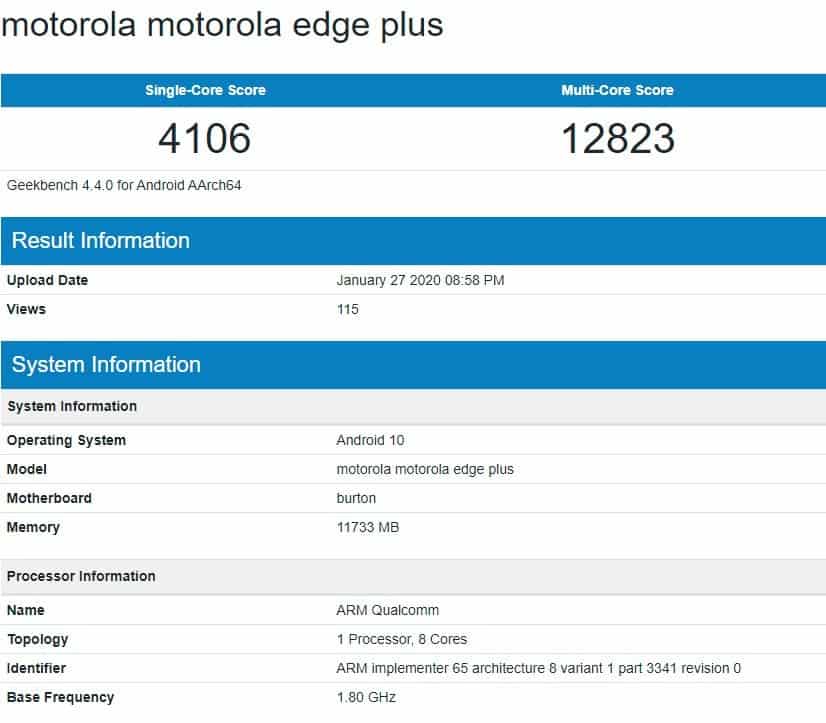 As we can see in the image above, a device with model name “motorola motorola edge plus” was just found on renown benchmark platform Geekbench. This benchmark should suggest that the handset is actually behind the corner while confirming some of the specs.

Now, albeit the benchmark does not show any actual data about the CPU, it’s quite obvious by looking at the single and multi core scores, along with the base frequency, that we’re looking at a Qualcomm Snapdragon 865 SoC. Specifically, we have a single core score of 4106, with a multi core score is 12823; while the base frequency is 1.8Ghz. So, the main specs we reported a couple days back appear to have been confirmed in some way.

Additionally, from the benchmark we also see the upcoming Motorola Edge+ will be powered by a whopping 12GB of RAM; while running Android version 10 right out of the box.

As far as other specs and design are concerned, we do not know much at the moment aside from the render we previously mentioned. Which if confirmed should mean the smartphone will pack a large display with a camera punch-hole in the upper left corner. We should also find a dedicated stylus, but from the first images it doesn’t look as advanced as the ones we have on Samsung’s Galaxy Note series.

Another very interesting aspect of the phone should come from its “Edge” moniker. Usually that means we will have a curved screen or some tech placed at the edge of the screen. But once again, from the first render we do not appear to see any of that.

What do you guys think about the Motorola Edge+? Are you looking forward to it? Let us know in the comments section below!

Previous Huawei will lower the prices for Huawei P40