After introducing a slew of smartphones in the market, Realme is now focussing more on the accessories, fitness bands and IoT products. The Chinese smartphone maker is now working on its first-ever wireless charger dubbed simply Realme Wireless Charger. The charger has recently appeared on the Wireless Consortium listing for the necessary certifications. As expected, the certification has revealed some key information on the product. 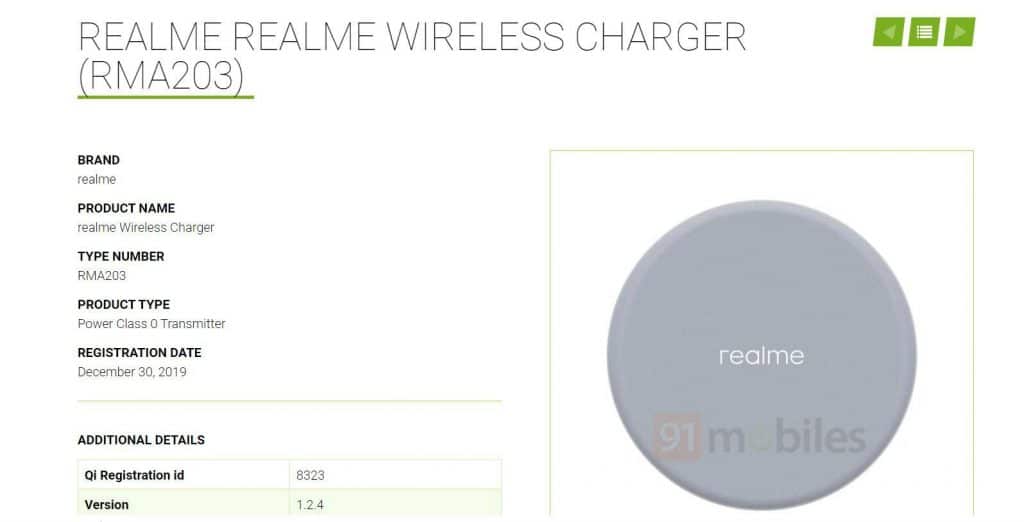 As per the listing, Realme’s upcoming wireless charger surfaced with the model number Realme RMA203. The wireless charger will simply be called Realme Wireless Charger. The listing has also revealed the charging capacity of the product. We’re looking at the 5W charging potential on the accessory. Well, 5W is a bit disappointing when it comes to a wireless charger. This means that your phone or any other wireless supported device will take some annoying amount of time to fully charge.

We’re speculating that the company is also working on a higher variant of the chargers – one with at least 10W charging potential. There is a good chance that the 10W variant might not get the certification as of now. We might see it in the listing in the coming weeks if that’s the case. Furthermore, the listing has also revealed the design of the wireless charger. By the looks of it, Realme wireless charger comes with the standard circular design with the company’s branding on top.

Apart from just small accessories, Realme is also working on its first fitness band which recently got leaked revealing its key design aspects. The company will also launch its budget Realme C3 smartphone on February 6th in the Indian market. We might see the fitness band getting official during the same conference.