Today, Francis Wang, Realme’s chief marketing officer in India, said on Twitter that Realme will launch its first smart TV at this year’s MWC. If the TV response of the Realme TV is good, it will consider trying to build a Realme laptop in the future. 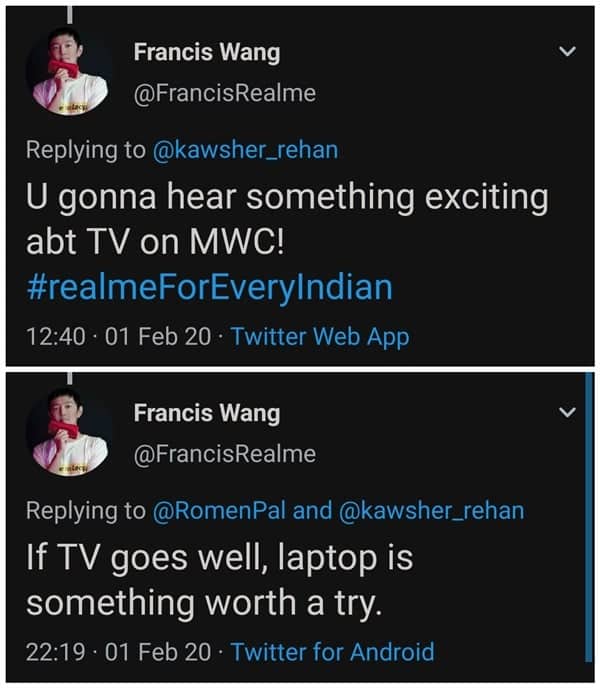 Previously, Wang Wei, vice president of Realme and president of global products, had also responded to the Realme TV product launch plan when he was interviewed by the media. Wang Wei said at the time: ‘We are in the research and development of TV. But there will be product differences for different regions around the world. It will be released this year.’

In addition, there is not only one category of TV in Realme’s planning: ‘We build the future AIoT ecosystem based on the three major scenarios of individuals, families, and travel. For individuals, there are wearables and audio products. We will cover wearable products in all scenarios. Plus, there will be audio products, such as TWS headphones and regular headphones. As for the family, the core is the TV, and we are already planning its launch. Smart home products will also be involved. Travel is more about life, such as power banks, bags, and luggage.’

At present, major Chinese smartphone manufacturers have poured into the TV field. Huawei and Honor have launched smart screen products. OnePlus has launched high-end quantum dot TVs in India. And Xiaomi has successfully created a historic record of 10 million units shipped in 2019.

Unfortunately, there is no certain information about the Realme TV configuration. However, considering Realme’s consistent positioning, the TV will continue the company’s cost-effective strategy. The main rivals will be the Xiaomi TV and Redmi TV. In addition, considering Realme’s main battlefield In India, the struggle will be fierce.

Next POCO Brand Will Enter Chinese Smartphone Market As Well