POCO is Xiaomi’s sub-brand. In fact, it’s one of the myriads of sub-brands. However, this one is focusing on the Indian and overseas markets. Till the date, it has released only one device, the POCO F1. Due to the price-over-performance ratio, it won the world. However, later, Redmi became an independent brand. And many have been thinking, the parent manufacturer will discontinue this brand. However, today, it released the POCO F2. Today, Xiao Cheng, vice president of Xiaomi, said in a reply on Weibo that POCO brand is expected to enter the domestic market in the future.

It is worth noting that Manu Kumar Jain, the global vice president of Xiaomi and the chief of the Xiaomi India business, also recently announced that Xiaomi’s overseas sub-brand POCO will operate independently. Today, the first new machine POCO X2 was launched after the independence of the POCO brand in India. 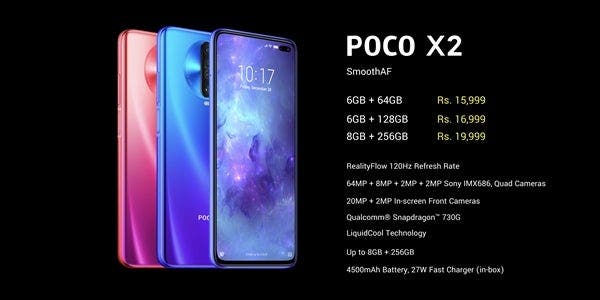 In fact, it’s a pseudo-flagship smartphone that is going to break all imaginations about flagship phones’ prices. This handset uses a 6.67-inch 120Hz dual-hole full-screen. Under the hood, there is a Qualcomm Snapdragon 730G mobile platform, which is paired with an LPDDR4X memory and UFS 2.1 flash storage. There is also a dual-front-camera with a 20MP + 2MP sensors combination, while the rear camera features a 64-megapixel main CMOS.

According to Indian media reports, the POCO brand may launch the Pocophone F2 Lite smartphone as well. It should be considered as a mid-range device.

At the moment, this is all we know about POCO’s arrival in the Chinese market.

Previous Realme TV Is On The Way. If Succeeds, Realme Notebook Will Come As Well

Next PS4 emulator "GPCS4" has successfully run its first game