Oppo is working on its next generation of Find X smartphone dubbed Oppo Find X2. The smartphone has already been leaked numerous times and has been sharing limelight since the last couple of weeks. The device has now knocked at the GeekBench listing, getting the certification. As expected, the listing has revealed key information on the device. 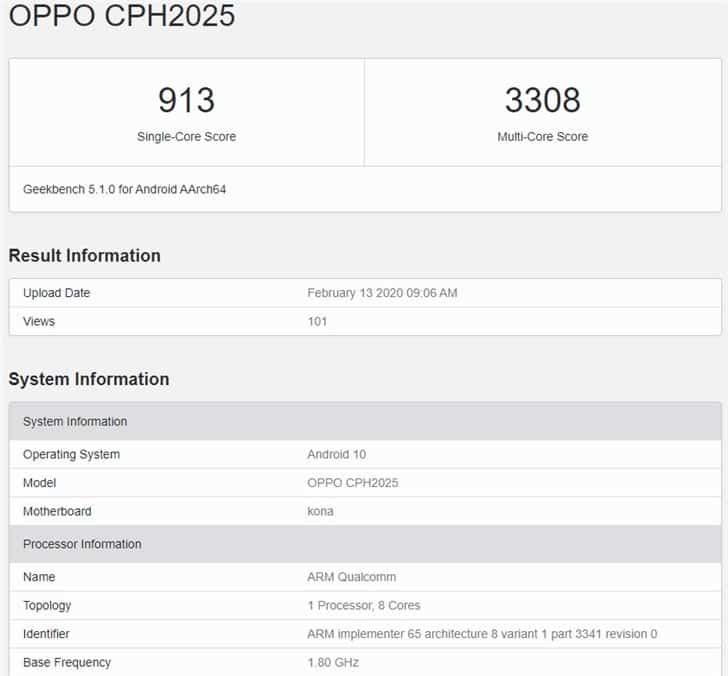 As per the GeekBench listing, a new smartphone has been listed with the model number Oppo CPH2025. The smartphone is spotted with a massive 12GB of RAM along with a Qualcomm chipset clocked at 1.80Ghz. This points towards the flagship Qualcomm Snapdragon 865 chipset. Furthermore, the device runs on the latest Android 10 operating system.

The brand was supposed to unveil the device at the MWC 20 conference. Since it has now been cancelled due to the outbreak of coronavirus. With that said, the device should launch soon and the latest appearance at the GeekBench solidifies that as well.

Oppo Find X2 was earlier leaked revealing the first-ever live image of the device. Coming to the specifications, the smartphone is confirmed to come with 2k resolution display having a high refresh rate of 120Hz. The display will feature a sampling rate of 240Hz along with SDR to HDR conversion and up to 1200 nits brightness. Furthermore, it will come with a punch-hole design and curved edges. We’re also expecting a whopping 60W Super VOOC charging capabilities.