A number of Snapdragon 865 models were unveiled this month. In addition to the already launched Xiaomi Mi 10 and Mi 10 Pro, there are iQOO 3 5G and Realme X50 Pro 5G. According to a recent poster, the Realme X50 Pro 5G will come with a 64MP ultra-clear hawk-eye main sensor. This smartphone will use six cameras in total and they all support 20x hybrid zoom. The image system parameters seem consistent with the Realme X50. However, we do not know if the 64MP camera is a Sony IMX686 or Samsung GW1 sensor. In addition, there is no information on the other cameras. 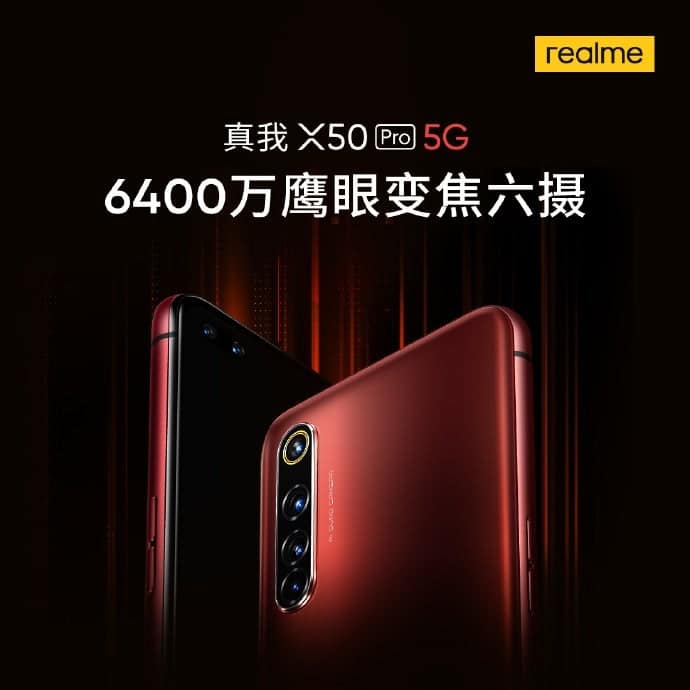 In the core configuration, Realme X50 Pro 5G will use a Qualcomm Snapdragon 865 flagship platform. It also has 12GB LPDDR5 memory, UFS 3.0 flash memory, and it runs on Android 10.

In addition, this smartphone comes with a Super AMOLED dual-punch-hole full-screen display. This is Realme’s first flagship with an OLED punch-hole screen. The refresh rate is 90Hz and the resolution may be FHD+. Realme latest flagship support dual-mode 5G, and achieve full coverage of mainstream bands such as n1 / n41 / n78 / n79. In addition, it will use a GaN (gallium nitride) charger as standard.