Samsung might be preparing to launch its next smartphone in the Galaxy A-series. The details about the Samsung Galaxy A71 5G first appeared early this month. Now, the smartphone has stopped by the Geekbench benchmark bearing the model number SM-A7160. The listing further confirms some of the key features of the upcoming model.

The Geekbench leak shows that the Galaxy A71 5G will use the company’s in-house Exynos 980 chipset paired with an ARM Mali-G76 MP5 GPU. The device benchmarked on Geekbench comes equipped with 8GB of RAM and runs Android 10 OS. In terms of performance, it scored 3,078 points in the single-core test and 7,346 in the multi-core test. 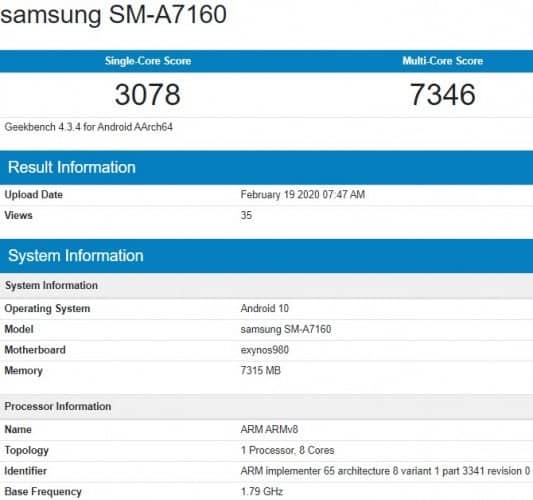 The score is higher than the Snapdragon-powered version of the regular Galaxy A71 4G variant. However, the design of the device is not known yet, and official images might leak in the next few weeks. The report further noted that the Samsung Galaxy A71 5G might be identical to the Galaxy A71 4G in terms of several other key features.

The Galaxy A71 5G will likely launch in the 5G-ready countries, including the USA, China, New Zealand, Australia, and some other European countries. However, this information, is just based on the rumors, and Samsung hasn’t revealed any plans on it yet. Since the device has 5G network support, it could have a boast in its battery capacity than its predecessor.

To recall, the Samsung Galaxy A71 4G model made its debut back in December 2019 in Vietnam, and the device later launched in India yesterday. The smartphone has a Qualcomm Snapdragon 730 SoC with Adreno 618 GPU. It features a 6.7 inches Super AMOLED display with Corning Gorilla Glass 3 protection.

The Galaxy A71 4G comes equipped with a Quad-camera setup at the rear. It sports a 64-megapixel primary camera, a 12-megapixel wide-angle lens, and two 5-megapixel depth and macro sensors. On the front, it has a 32-megapixel selfie snapper.

Next Android 11: dark mode will automatically activate at sunset