After many reports and rumors, it seems that we finally got the confirmation of the fast-charging technology coming in the Black Shark 3. Unless you have been living in a cave for the past few weeks, you know that Xiaomi is about to launch a new smartphone for its very succesful Black Shark series of gaming smartphones. The new handset will go official along with a Pro variant on March 3. Today, the company posted another official teaser confirming the battery capacity and charging.

Rumors have indicated the exact capacity of the Shark 3 battery as a 5,000mAh cell. However, the official information indicates that the gaming smartphone will debut with a massive 4,720mAh battery. It’s 280mAh less than the rumors, however, it still is a massive capacity. This power cell will be replenished with 65W fast-charging technology. That’s a first among smartphones, but it seems to be a growing tendency among companies. Soon we will be looking at 100W fast-charging technologies. 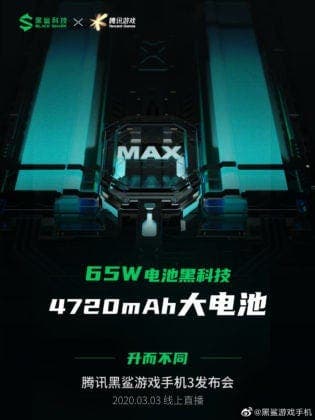 The remaining specifications in the Black Shark 3 include a QHD+ display with a 120Hz refresh rate. Under the hood, we’ll have Qualcomm’s latest Snapdragon 865 SoC. The handset will also fly high thanks to 16GB of LPDDR5 RAM. According to rumors, there will be also a special edition of the phone made in partnership with the gaming giant Tencent. We are just a few days from the official release, we believe that more details will keep popping in these few days.