The Chinese phenomenon TikTok is gathering achievements by the days. After surpassing Facebook to slide behind WhatsApp as the most-downloaded app last year. This year, however, the short-video app went even further leaving Mark Zuckerberg’s messaging platform behind. According to recent data from Sensor Tower, Douyin and TikTok were downloaded 104 million times on the Google Play Store and Apple app store.

According to the report, TikTok surpassed WhatsApp as the world’s most downloaded mobile app in the month under reference. The figure represents a massive 46% increase over the same period last year. It also shows a 27% increase when compared to the total downloads in December 2019. The stat reveals the top three markets for TikTok downloads during this period are India, Brazil and the United States. Thus, the figure could even be higher as it doesn’t include downloads in third-party Android platforms in China and other regions.

Currently, TikTok downloads exceeded 1.82 billion times. From a trend perspective, the download volume in February will reach a new high, and the demographic dividend of overseas emerging markets will support TikTok. As a result, the platform will keep experiencing consecutive growth every month. 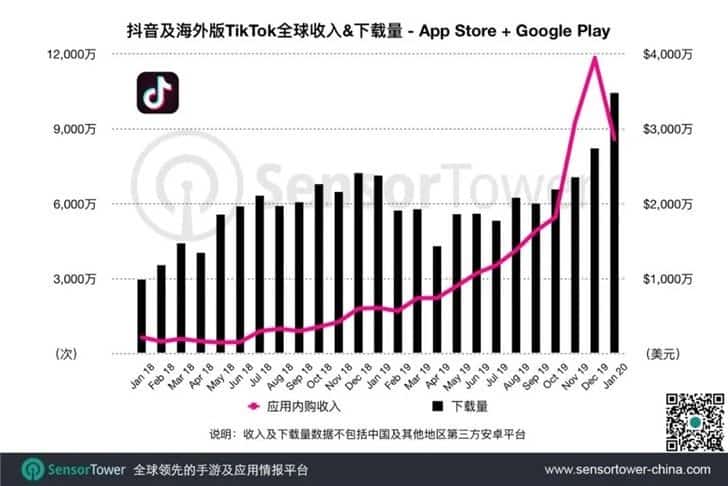 When it comes to the financial part, Douyin and TikTok’s global revenue in December soared to $39.4 million but feel to $28.6 million in January. Still, the revenue ranks as the third-highest revenue-generating month after December and November 2019. The in-app purchase revenue comes mainly from China and the United States, accounting for 84.5% and 10.1% of total revenue in January, respectively.

Duoyin, the Chinese counterpart of TikTok, reached its peak during the Spring Festival

The Chinese version Duoyin at first saw a decline in its in-app purchases. However, it managed to recover when the Spring Festival holidays began on January 23. According to the report, Duoyin’s in-app purchases were 18.7x higher than the revenue during the Spring Festival 2019. The wider adoption in a short period could be a result of the Coronavirus outbreak. More people were at home and spent more time with smartphones and other electronic gadgets.

Next MediaTek compares Helio G70 with Snapdragon 665 in a video