MediaTek gave a step further on its chipset reinvention with the release of the Helio G70. Just like its sibling, Helio G90, the G70 sits as the most affordable version of the gaming chipset. It is aimed at the low-end segment delivering solid performance at an affordable price tag. The device is present on the super affordable Realme C3. As part of the marketing for the chipset, Mediatek released a video comparing its latest SoC with Qualcomm’s Snapdragon 665 SoC.

Realme C3 is the only commercially-available phone with an Helio G70 processor, it is no surprise that it is the device MediaTek has chosen for its test. The Snapdragon 665 phone used for comparison is the Oppo A9 2020. The comparison covers areas such as Benchmark Scores, App Launch Time and Game Launch time.

The first test puts both phones running AnTuTu and the result shows the Helio G70 wins the round with 193,790 points. The Snapdragon 665 phone reached 166,126 points. Curiously, the phones aren’t running the same version of AnTuTu. The Realme C3 is running a more recent version of the benchmark platform. There is also a test on GeekBench, 3D Mark and GFXBench. Unsurprisingly, the G70 tops the Snapdragon 665 in all scenarios.

In the App Launch Time category, the Taiwanese firm tested the time to launch apps such as YouTube and Flipkart. While the Realme C3 was faster in loading YouTube, we can say that we had a draw in Flipkart. The last stage of the test compares launch time for games such as PUBG, Call of Duty and Asphalt 9. You can see the results through the image below. 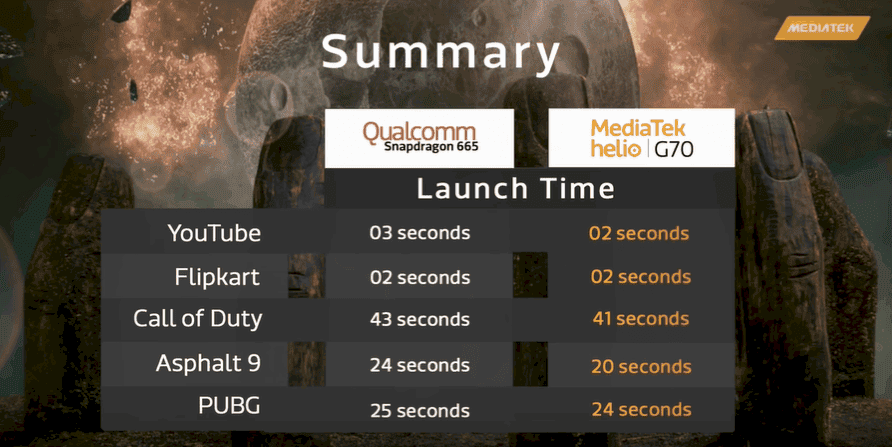 While the Helio G70 has won in all the tests, we can’t say that the Snapdragon 665 is really lagging behind. Actually, MediaTek has been lagging behind Qualcomm for the past few years. However, apparently the company managed to fix the issues with its chipsets and is finally ready to compete directly with the US giant.

Previous TikTok dethroned WhatsApp as most downloaded app in January