In recent times, the wearable device market is booming, especially true wireless (TWS) headsets. Most of the major manufacturers in the market already have their own true wireless headset. Now, the Xiaomi True Wireless Headset 2S could be on its way.

The headset recently appeared on the Wireless Charging Alliance (WPC) database. This device comes with the model number “TWSEJO5WM”. The available image looks exactly the same as Xiaomi True Wireless Bluetooth Headset 2. In addition, the charging box is also the same. Of course, this image may be just a placeholder image, but the “S” update should not be a big update. 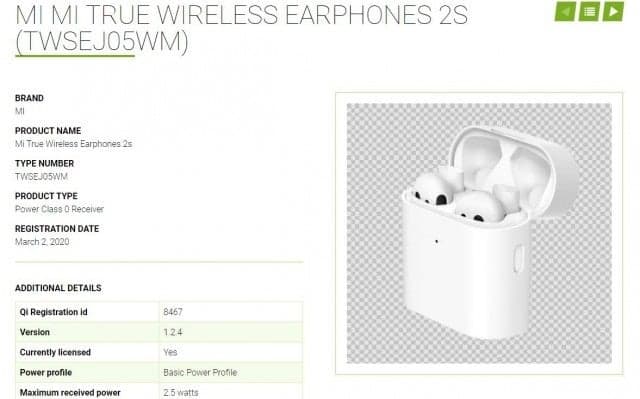 Well, it seems this device is the same as the previous generation in terms of design. However, its appearance on the Wireless Charging Alliance (WPC) means that the headset already supports wireless charging. From the image, you can see that the maximum power that the wireless charging offer is 2.5W.

It is worth mentioning that Xiaomi 10, which was just released, supports 10W wireless reverse charging, which is expected to achieve reverse wireless charging for this headset. What do you think about this new device from Xiaomi? Let us know what you think in the comments below

Next iPhone 9 Mass Production Likely To Be Delayed