Early this year, Samsung completed its plans of updating both 2018 and 2019 flagships to the latest Android version. In the form of One UI 2.0, the company shipped a new vision of its software to its premium smartphones. Now, the company is focused in bringing the referred update to other smartphones in the mid and low-end segments. Today, the Korean firm is rolling the highly-anticipated update to Samsung Galaxy M40. 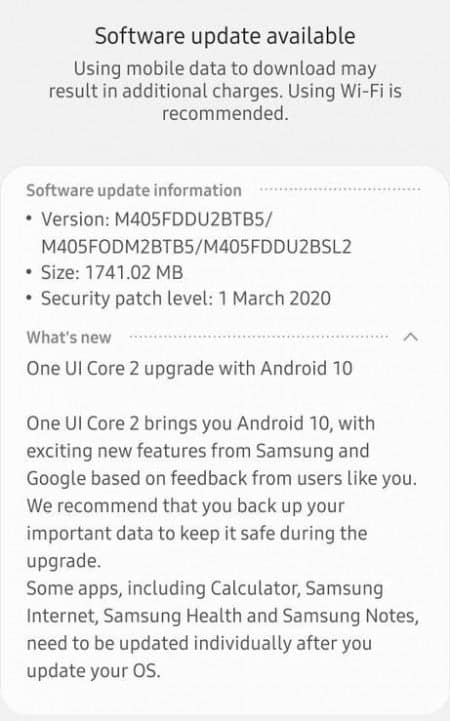 Samsung is rolling out the update in India. The M405FDDU2BTB5 firmware weighs in at just over 1.7GB and is rolling out over the air. Interestingly enough, the update also introduces the March 2020 security patch. That’s a nice add-on that will make users feel like they’re really running the latest firmware. Besides Google’s security patch, Android 10 introduces new gesture navigation, improved privacy and notification management. Moreover, there’s Digital Wellbeing which includes Samsung’s own features. The update is rather limited in availability, but we expect this to change in the coming weeks.

The Galaxy M40 came to the market back in June 2019. The smartphone packs a 6.3-inch punch-hole display with FHD+ resolution. Under the hood, it carries a Snapdragon 675 paired with 4GB/6GB of RAM. The handset draws power from a 3,500mAh battery and now runs Android 10-based OneUI 2.0 in all its glory.

Next Meizu 17 Is the Most Awaited Smartphone in China