In the past few weeks, a large wave of new Chinese new flagships have been launched. These include the Oppo Find X2, Find X2 Pro, Xiaomi Mi 10, Mi 10 Pro, Vivo iQOO 3 and many more. While in the upcoming days we’ll see the likes of Redmi K30 Pro, Huawei P40 series, Meizu 17, Vivo NEX 3S and Nubia Red Magic 5G. A very interesting pack of phones, all bringing top specs and features.

Meizu 17 Is the Most Awaited Smartphone in China 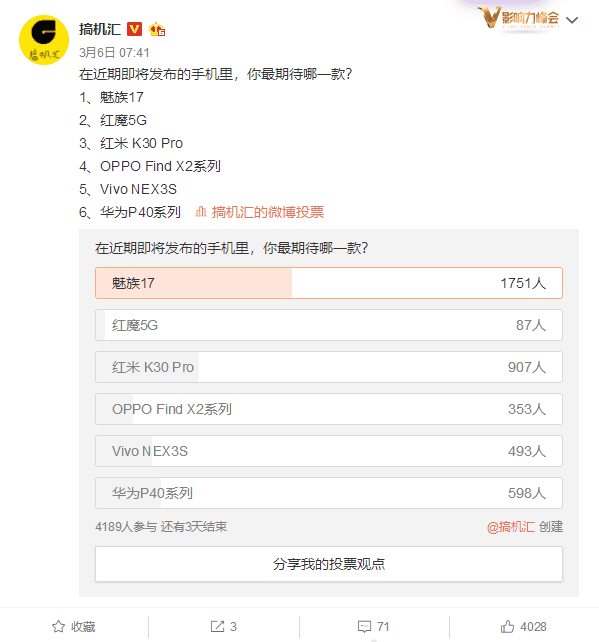 Today, Chinese blogger – ngjihui – decided to start a poll over on Weibo – China’s Twitter equivalent. In the poll, he asked his followers which phone they were looking forward the most and well – as the title suggest – the Meizu 17 came out the undisputed winner. The smartphone did indeed get 1751 votes, ranking first almost doubling the second; which in this case was the Redmi K30 Pro.

So, at least in China, Meizu’s upcoming flagship is apparently the most awaited phone. Something that we could say is very surprising giving the little success of its predecessors.

As we learned earlier though, the Meizu 17 should bring a bunch of interesting changes. According to the latest leaks, the smartphone is indeed going to feature a horizontal camera setup with three sensors and an LED flash between the first and second snappers. That means the previously rumored “Oreo” camera module was actually fake news.

Moving onto the front of the handset, we still have very little info but we can safely assume that Meizu will opt for a punch-hole camera design; saying goodbye to the not too slim top bezel.

As far as other specs are concerned, Meizu’s phone will be equipped with the Qualcomm Snapdragon 865 flagship CPU; along with its support for SA and NSA dual-mode 5G. Huang Zhang, founder of Meizu Technology, also said that the Meizu 17 will bring a few new innovations in terms of materials, image quality and user experience.

Next Galaxy S20 is the less durable of S20 trio, test reveals