In 2008, Samsung introduced AMOLED displays. The first smartphone equipped with this screen was the Nokia N85. Until a few years ago, AMOLED screens still had problems such as turning into green, burning, etc. However, AMOLED still has become the standard for many high-end and flagship machines, including Samsung. In fact, currently, only it provides excellent display effects. After that, Samsung introduced the Super AMOLED and Dynamic AMOLED. We believe the former is familiar to everyone. As for the latter, it is the same Super AMOLED supporting HDR10+. It has been used in Galaxy S10 and later products.

Recently, Samsung’s applied for the ‘Samsung PIFF’ trademark. And today, we learned that it was approved. The trademark is classified as a ninth category, and its description is very simple: ‘the display screen of a smartphone’. 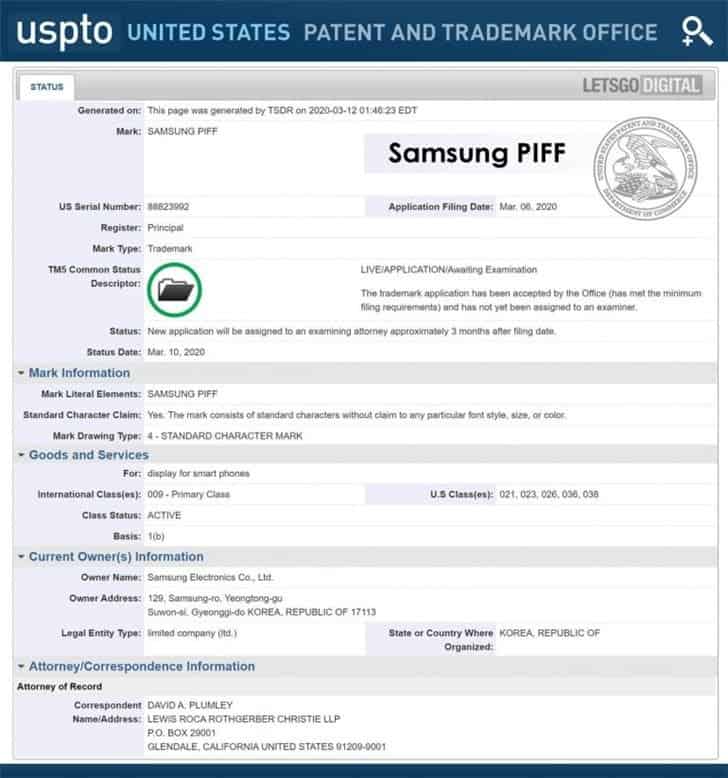 The type of panel for this screen is unclear. But because no OLED appears in it, there is a high probability that such a panel will not be used. Based on previous news, we currently have the following three guesses:

Among them, the mini LED is a super product before the micro LED, and the display effect can be comparable to that of the OLED. But there will be no problems such as screen burn-in. At present, Apple is vigorously developing such a panel.

The latter assumption is based on the news that Samsung previously introduced OLED panels for 5G smartphones. Compared with current products, it consumes less power and can effectively extend the standby time of smartphones.

If things go well, we are likely to see PIFF in the Galaxy Note 20 series in the second half of the year.

Next Logitech's Wireless Charging Pad 3 in 1 Announced At $129