Until today, we have been getting leaks and rumors concerning only the appearance and camera features of the upcoming budget-friendly Galaxy A series smartphone of the South Korean company. But today, the Samsung Galaxy A21 appeared in the Geekbench database. This simply means are already acquainted with some key specs, such as processor, memory, system software, etc. 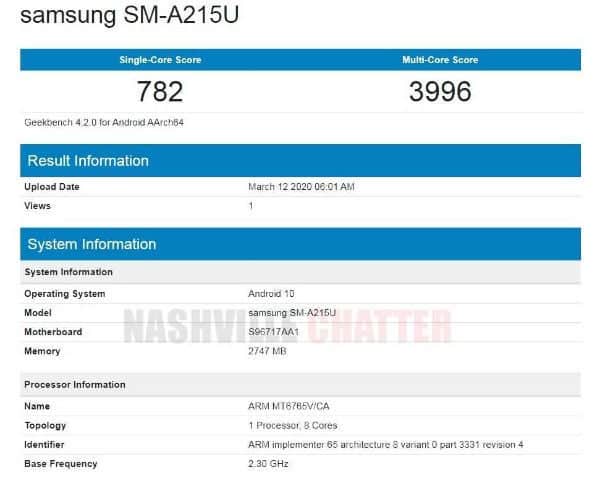 A few days ago, the Samsung Galaxy A21 appeared in the Geekbench database. The model is SM-A215U. Its single-core test score was 782 points, while the multi-core test was 3996 points. In addition, it can be seen from the screenshot that the model is equipped with a MediaTek MT6765V octa-core processor. In other words, we are dealing with a handset that is powered by the MediaTek Helio P35 chip. Its main frequency is 2.3GHz. Apart from this, we can also see that the Samsung Galaxy A21 has 3GB of memory and will be pre-installed with the Android 10 system. Unfortunately, the screenshot doesn’t reveal any other information such as screen, battery, etc.

Previously, we have got acquainted with the Samsung Galaxy A21’s case renderings. According to them, on the back, it carries a triple-camera module. There is also a traditional fingerprint recognition module. On the opposite side, we can see a drop screen design. The droplet area hosts a single selfie camera. Since the A21 is going to be the lower offering under Galaxy A lineup, the presence of notch makes much more sense. The punch-hole display design should be reserved for much more premium models such as Galaxy A51 and A71.

Previous These are the brands that updated to Android 10 faster

Next Is The Next-Gen of Smartphone Screen Coming? Samsung PIFF Trademark Approved