We are waiting for the Nubia Magic 5G smartphone. As the name implies, this handset will make a tough competition to the newly announced Black Shark 3 5G. The latter is considered to be the first 5G gaming smartphone. But Nubia’s models have been always rivaling with all top gaming devices. So there is every reason to think the upcoming model will not be an exception. But who said this manufacturer will release only one 5G handset? Today, we were informed another Snapdragon 865 5G smartphone has passed the national 3C certification. And it is expected to be the rumored Nubia Z series new machine. This new device model is NX651J, and it supports up to 30W fast charge. 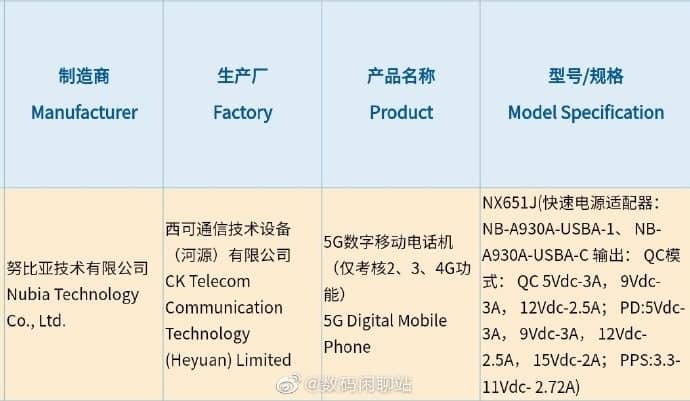 Earlier, Nubia launched the Z20 smartphone with a front-back symmetrical double-curved design and a curved metal middle frame. It also came with two-sided fingerprint power two-in-one buttons. In terms of screen, the Nubia Z20 uses a 6.42-inch FHD+ flexible hyperboloid AMOLED screen with a ratio of 2340 × 1080 and an aspect ratio of 19.5:9. On the back, it carries a 5.1-inch AMOLED flexible screen.

Under the hood, the Nubia Z20 sports a Snapdragon 855 Plus processor. In its turn, the latter is accompanied by a 512GB storage and 4000mAh battery, which supports 27W fast charge. Also, it supports PPS protocol, and is compatible with PD and QC4.0 fast charge. Among the other selling points, we can mention the dual-frequency GPS, dual VOLTE, dual-band WiFi, etc.

So we are waiting for the new Nubia Z line model to bring better hardware and performance.