We are already aware of the fact that Realme is currently working on its next-gen budget device dubbed Realme 6i. In fact, the smartphone has already been a part of numerous leaks and rumors in the past. Well, the same device has now surfaced on the GeekBench listing revealing some key aspects along the way. On top of this, an unknown Realme device with 5G connectivity also appeared. 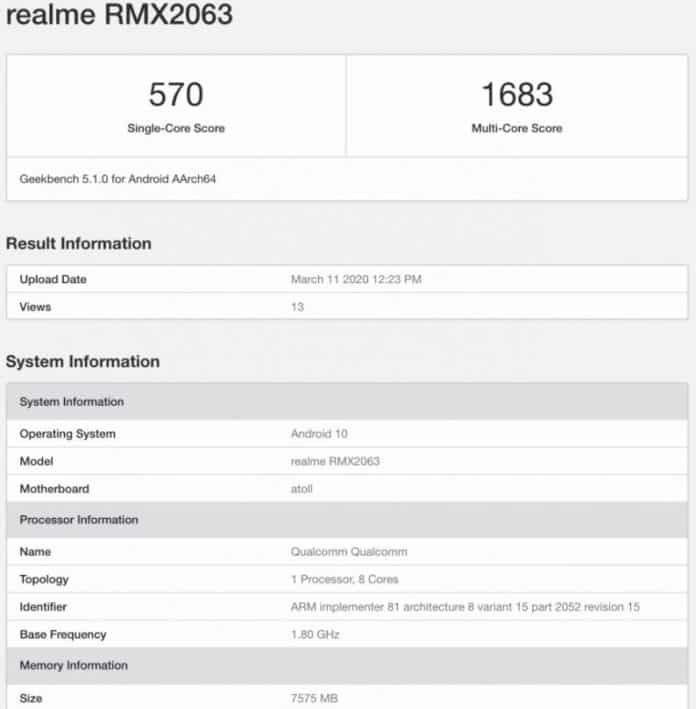 Realme 6i has appeared on the GeekBench listing with the model number RMX 2040. Previously, we saw the same model in an FCC filing. As per the listing, the device will run on MediaTek Helio G80 chipset paired with 4GB RAM. Furthermore, the device makes use of the latest Android 10 operating system. Coming to the benchmark scores, Realme 6i scored 345 points in the single-core performance and 1293 in the multi-core test.

Talking about the second device, Realme RMX 2063 is the next device that appeared along the way. Sadly, the moniker of the device remains unknown as of now. The listing has revealed the presence of Qualcomm Snapdragon chipset with 5G capabilities. The SoC is paired with 8GB RAM and Android 10 OS. As you might have guessed, the chipset model is not known at the moment. Speaking of scores, the device scored 570 in single-core performance and 1683 in the multi-core tests.

It is worth mentioning that Realme is supposed to be working on budget 5G smartphone and this might be the same device in the questioning. For those who’re unaware, the smartphone maker recently launched its first 5G device dubbed Realme X50 Pro 5G.

Realme 6i will see its official unveiling on March 17th which is right around the corner. Coming to the other device, we should see more information coming forward in the coming days.

Next Modular DOOGEE S95 and S95 Pro phones on sale