There are several waterproof rugged smartphones in the market, but DOOGEE have some unique models in the category. Especially the DOOGEE S95 lineup stands out featuring modular phone design, very solid specs and good pricing. And for the next two days the customers will have a chance to get the fresh new basic model S95 just for $229.99, or even cheaper with extra $30 Aliexpress coupons. But how about the slightly tweaked DOOGEE S95 Pro ? Don’t worry, it’s also on sale too.

So for the duration of the promo period (March 15th – March 16th) you can get the flagship modular rugged DOOGEE S95 Pro for just $359.99 in 8+128 GB memory configuration or $399.99 for the 8+256 GB memory configuration. There are also some extra $10 coupons for the fastest ones so check out the offer on Aliexpress to know more. 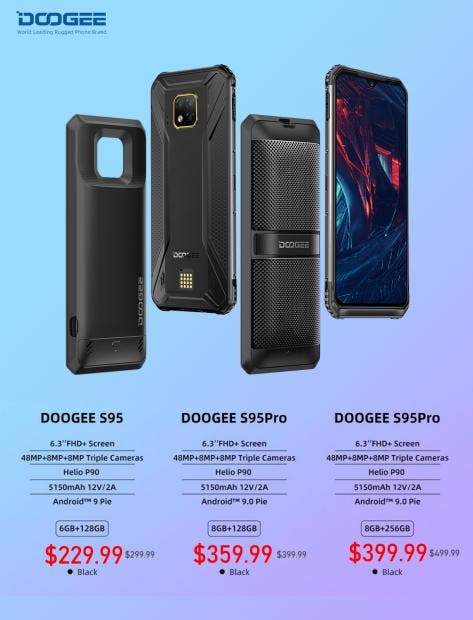 The Doogee S95 Pro flagship smartphone is protected in accordance with IP68, IP69K, and MIL-STD-810G standards. The smartphone will remain operational after being in the water at a depth of two meters and is even able to withstand a directed stream of hot water under pressure. The gadget will remain intact after falling from a height of 1.2 meters onto a hard surface, as some structural elements are made of titanium alloy. The handset is clearly designed for users who are mobile in difficult conditions since it meets the IP68 and IP69K standards, so it can survive up to 4 hours underwater three meters deep. The device is a bit exaggerated to punch and beat, and it takes off well in all kinds of extreme conditions, as the MIL-STD-810G has been certified. Last but not least, the Doogee S95 Pro weighs 285 grams and has a thickness of 13.8 mm.

Underneath the indestructible cover, the ultra-powerful and modern MediaTek Helio P90 chipset (which smoothly brings the Snapdragon 710 level), with 8GB RAM and 128GB (UFS 2.0) internal storage, can be expanded if you wish another variant comes with 8GB RAM and 128GB (UFS 2.0) internal storage. It has also taken a step forward in the field of mobile photography, with a 48-megapixel Sony IMX586 sensor on the back, behind f / 1.8 aperture lenses, and an 8-megapixel ultra-wide-angle and 8-megapixel telephoto unit. And on the publisher-facing side, a 16-megapixel camera was fitted by Doogee at f / 2.0 aperture.

Inside the Doogee S95 Pro is a large 5150 mAh battery that can be powered with 10W wireless and 24W wired high-speed charging. Your device is running Android 9.0 Pie and we hope to see more updates later. Also worth mentioning is the full 4G support, the Hungarian menu, and NFC, which makes mobile payment possible. Another big advantage of the handset is that it has special magnetically connected modular accessories, such as the newer Motorola phones. One is a Hi-Fi speaker and the other features an extra battery, which increases the original capacity by another 3500 mAh.

On the overall, the Doogee S95 Pro smartphone looks great and amazing. Doogee S95 Pro features a beautiful body with a good camera set-up and a generous in-built memory as well. Doogee S95 Pro has a massive battery capacity and dust and water-resistant. As mentioned above, the phone will be perfect for blue-collar workers. Learn more about the Doogee S95 Pro visit on Official Doogee Site.