Realme is gearing up for its upcoming launch event where the brand will unveil the all-new Realme 6i smartphone. The unveiling event is scheduled for March 17 which is right around the corner. The device has already been teased numerous times by the brand. Well, that happened again and delivered us some more details on the device.

Realme Mayanmar has posted some teaser images on its official Facebook profile giving some key specs ahead of the launch. As per the teaser image, the device will come with a quad-camera module having a 48MP primary sensor. Furthermore, we now know that the phone will make use of a 5,000mAh battery packed inside. The teaser further confirms that the device will indeed be powered by Helio G80 chipset. 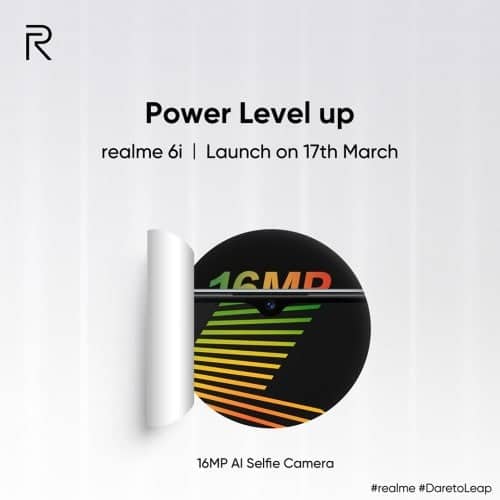 To easily top up the device, the device comes with 18W fast charging support over the USB Type-C port. Another teaser image also talks about the front selfie camera. We’re looking at a 16MP AI selfie camera which will be housed inside a waterdrop notch display. You can see the waterdrop notch design in one of the teaser images. This seems to be a solid upgrade over its predecessor which packs 8MP selfie sensor. Lastly, we now know that the Realme 6i will not feature the side-mounted fingerprint sensor like the 6 and 6 Pro smartphones.

It is also worth mentioning that the device recently made its appearance on the GeekBench listing. The device comes with 4GB RAM along with Android 10 operating system.

As mentioned earlier, the official launch event is quite near, with the date being March 17th. Just like these teasers, we are expecting more to come forward in the coming days. With that said, they should shed a light on more unknown aspects of the device.