For the year 2020, Samsung is already working on numerous smartphones under its Galaxy A and Galaxy M lineup. Apart from Galaxy M21, it seems like the company is also working on the Galaxy M01 smartphone. We saw a similar naming scheme (Galaxy A01) with the Galaxy A-lineup earlier this year.  The smartphone has, for the first time, appeared on GeekBench listing revealing some specs and benchmark scores. 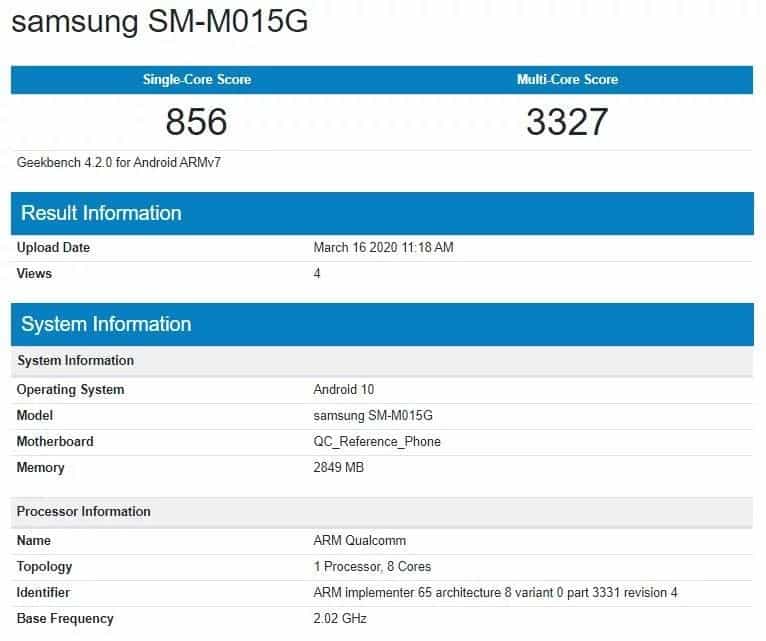 The Galaxy M01 has visited the GeekBench listing with the model number SM-M015G. As per the listing, the device will come with an unknown Qualcomm chipset clocked at 2.02GHz having eight cores. Sadly, the listing doesn’t talk about the chipset model or whether all of the cores are identical or not. The SoC will be paired with 2GB RAM and the device will run on the latest Android 10 operating system. Coming to the benchmarking scores, we’re looking at 856 points in the single-core performance while it managed to score 3327 in multi-core performance.

Apart from the GeekBench listing, SamMobile has also mentioned some other specifications and details. As per their report, the device will have internal storage of 32GB which would be expandable via MicroSD slot. Furthermore, the device will come in three color variants namely Black, Blue, and Red. On the screen front, we might see a display of 6.4-inch. Sadly, most of the details such as optics, battery, and chipset model are still unknown.

Since the device has now appeared on the GeekBench listing, we are expecting more information during the journey.

The report by SamMobile further enlights us on the availability aspect. As per the publication, the phone is being developed for the markets namely India, Sri Lanka, Nepal, and Russia. Just like the Galaxy A01, we’re expecting M01 to be a cheaper affordable option for the consumer.

Next These are the countries to receive Oppo Find X2 series