US carriers spent tens of millions of dollars on 5G advertising last year. But recent research has shown that they have had little effect. Counterpoint Research and NPD Group report that only 1% of all phones sold in the United States last year had 5G capabilities. Counterpoint reports that LG, Samsung, and other 5G smartphone vendors sold a total of 2 million 5G smartphones in the US in 2019. (An improvement from the 29,000 5G devices sold in the US at the end of the Q2, 2019.) 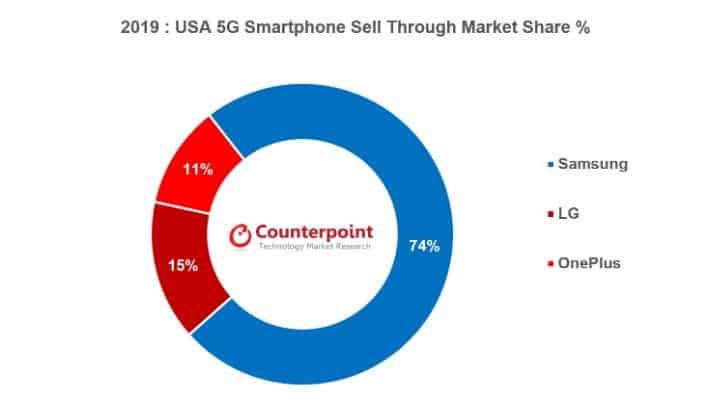 Counterpoint analyst Jeff Fieldhack explained in a press release: ‘U.S. 5G smartphone sales in 2019 are lower than expected for a variety of reasons.’ ‘The fact that AT&T and T-Mobile didn’t provide extensive 5G coverage until the end of the year hindered sales, and Verizon didn’t offer many phones that could connect to its mmWave 5G network’, he said.

However, the NPD provided some positive data, pointing out that Americans are at least more aware of 5G. The company said that in the H2, 2019, 89% of respondents knew the technology, up from 73% in the first half.

Of course, as the industry enters 2020, most analysts expect sales of 5G phones to rise significantly. For example, analysts at Counterpoint predict that as many as 25% of smartphones in the US will support 5G this year. Counterpoint’s Fieldhack added: ‘This growth will be largely due to the popularity of Apple’s 5G-enabled iPhone, which will be released in September 2020, and 5G smartphones that cost less than $500.’

Back in February, Wave7 Research reported that sales of 5G phones are continuing to grow. This is related to the fact consumers want to buy the ‘latest and best’ 5G smartphones.

However, Wave7 found that retail store employees have different attitudes towards Samsung’s newly released Galaxy S20 5G phones. In fact, many analysts believe that these devices may be too expensive for most consumers.

Of course, the spread of the coronavirus and its impact on sales and shopping can obviously reduce sales. And this refers to all smartphones in the United States and even the world, whether or not they support 5G.

Neil Mawston, executive director of Strategy Analytics, warned that despite the rapid growth of the smartphone industry. He said: ‘continued coronavirus panic and subsequent economic slowdown will limit overall demand for 5G this year.’