Chinese manufacturer, OnePlus, is getting set to unveil its latest flagship series, OnePlus 8 series. It is a common phenomenon for manufacturers to discontinue an older flagship (predecessor) for the arrival of a new flagship (successor). It appears that this will be the case with the imminent arrival of the OnePlus 8 series. According to feedback from netizens, OnePlus official website, JD.com, and Tmall flagship stores have all removed OnePlus 7T Pro from their shelves. The only available model of this phone is the McLaren 12GB+512GB limited edition. With the OnePlus 7T phones out of stock, there is a strong indication that the OP8 series is arriving soon. 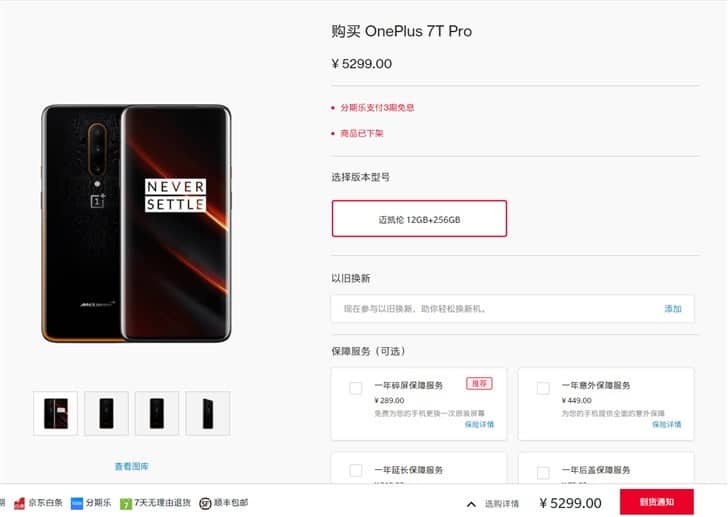 OnePlus 7T Pro is the company’s latest flagship which arrived in October last year. This smartphone comes with a 6.67-inch Fluid AMOLED display with a resolution of 3120 × 1440. It supports 90Hz refresh rate, HDR10+ and uses an under-screen fingerprint sensor. As for the hardware, this device uses a Qualcomm Snapdragon 855 Plus processor. It has up to 12GB of RAM (LPDDR4X) and 256GB (UFS3.0) storage space. This smartphone also ships with a 4085 mAh battery that supports Warp Charge 30T to keep its light on. In terms of camera, the triple rear cameras are 48MP (Sony IMX586 sensor) + 16MP super wide-angle (117 degrees) + 8MP telephoto with laser focusing function. With this sensor, you can quickly lock the focus on the object. On the front for selfies, the OP7T Pro comes with a Sony IMX471 16MP sensor.

As for the OnePlus 8 series, we expect at least two smartphones in this lineup. The OP8 and OP8 Pro should arrive in April this year. According to speculations, the OP8 Pro will use a 6.65-inch AMOLED QHD + display. The screen will come with a refresh rate of up to 120Hz. Under the hood, we will have Qualcomm’s latest Snapdragon 865 SoC with up to 12GB of RAM. It may also include a 4,500 mAh battery that supports 50W fast charging and wireless charging. The main camera is a Sony IMX 686 sensor.