Chinese manufacturing giant, Xiaomi, is releasing a couple of devices via its independent brands Redmi and Poco. According to recent reports, Xiaomi’s upcoming Poco phone has obtained EEC certification. On the database, this smartphone comes with the model number M2004J11G. There are speculations that this new Poco phone may be Poco F2. 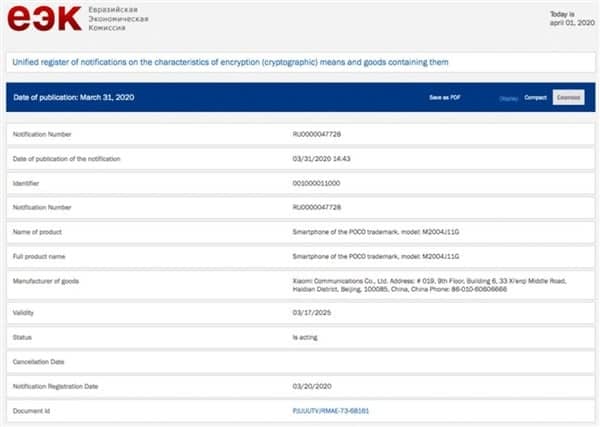 Previously, C Manmohan, the general manager of Xiaomi’s POCO brand in India, revealed that Poco F2 is not a Redmi K30 Pro rebrand. This smartphone is a brand new device with its own specifications.

Well, all rumors show that the Pocophone F2 will be the most affordable Snapdragon 865 flagship. Recall that the previous generation Poco F1 is a very cost-effective. This smartphone comes with the flagship Snapdragon 845 SoC but costs only $275. The Poco brand brings flagship performance for a low price.

Poco F2 will be a “cheap” flagship

According to speculations, the Poco F2 will continue the strategy of high performance and flagship configuration. This means that this smartphone will most likely be a highly cost-effective Snapdragon 865 flagship.

Of course, due to rising costs, it is impossible for Poco F2 to retain the $275 starting price. It will certainly be more expensive but will still have a cheap price-performance ratio. Furthermore, the general manager of Xiaomi’s POCO brand in India, this smartphone will sell for above 20,000 Indian rupees ($262).

It is worth noting that the Indian version of Redmi K30 Pro maybe another new Poco phone, and the industry speculates that it may be named Poco X2 Pro. In addition, C Manmohan, general manager of the Poco brand India, also revealed that Xiaomi is developing the TWS flagship headset, which is worth looking forward to.

What do you think about the upcoming Poco F2 flagship? Will this smartphone make a good mark in the ever-growing Indian smartphone market? Let us know your thoughts in the comment section below

Next iPhone 12: Foxconn says launch should be on time