The latest leaks that came from the Geekbench database have revealed some specs of the upcoming Samsung Galaxy Note 20+ version. It will come with support for 5G network connection.

Samsung is preparing to launch new releases of the Galaxy Note series a few months from now, and the Galaxy Note 20 phones have already occupied some leaks during the recent period.

The Galaxy Note 20+ phone has been especially monitored in the Geekbench database. The phone comes with the model number SM-N986U, and supports the connection to 5G networks. 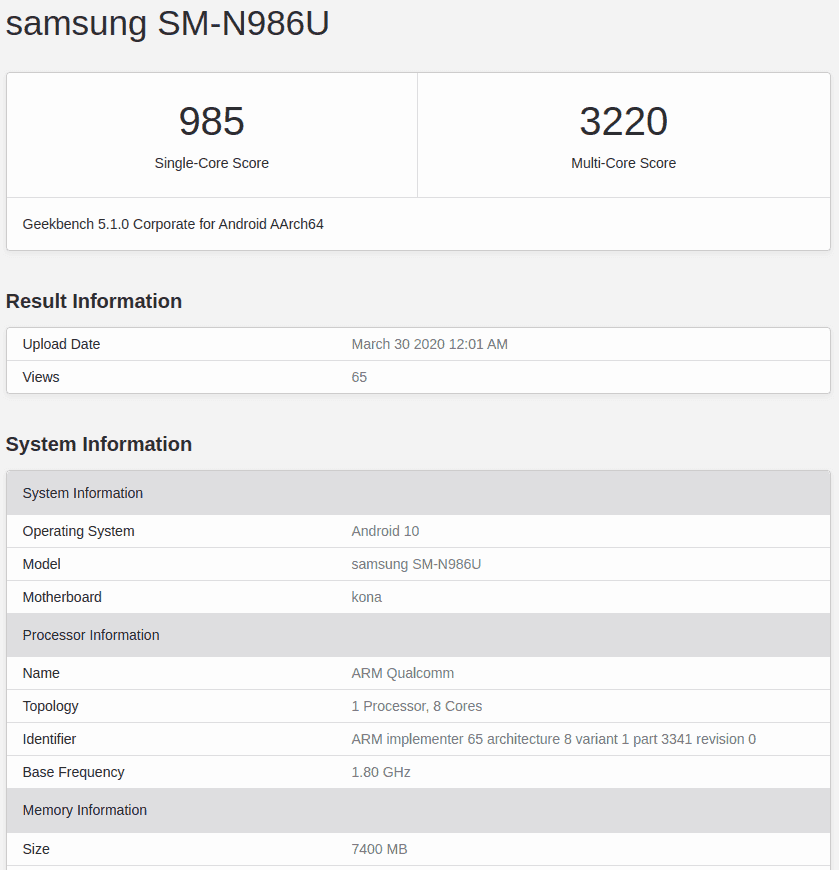 The leaks also confirmed that the Galaxy Note20+ phone is running Android 10 with 8 GB of RAM. In addition, the company should present another model with 12 GB RAM.

Also, the phone’s processing unit appears with a “kona” symbol. This version should include the upcoming Qualcomm Snapdragon 865 Plus processor chip due to the processing speed of 3.09GHz, while the Snapdragon 865 speed reaches only 2.84GHz.

The Note 20+ scored in the Geekbench 5.1 tests 985 points in the single-core test. In addition to 3220 points in multiple-cores. On the other hand, the Korean giant did not specify a date for the official announcement of the Galaxy Note20 series. But the leaks indicate August, the same date when the Galaxy Note10 series was officially revealed.

It is worth mentioning that according to some insiders, there will be a close “genetic” connection between the Galaxy Note 20 and Galaxy S20. Recently, Ice Universe and Max Weinbach leaks has confirmed that the characteristics of the Note 20 will not undergo significant changes compared to the Galaxy S20 series. The same goes for the camera. It seems that Samsung did not prepare for big innovations to present in the Note 20. Perhaps the stylus will offer some improvements. But these changes may not be enough to make users want to buy an expensive smartphone.

Previous Dark Sky: the weather app will disappear from Android because of Apple