Earlier this month, Xiaomi‘s sub-brand Redmi launched its first-ever fitness band dubbed simply, Redmi Band. As you might have guessed with the moniker, the fitness tracker comes with a budget-centric price tag. Priced at RMB 99 (roughly $14), the band offers colored display, built-in charger, and impressive 14-day battery life. After the China launch, it seems like the product will soon hit major global markets such as India. 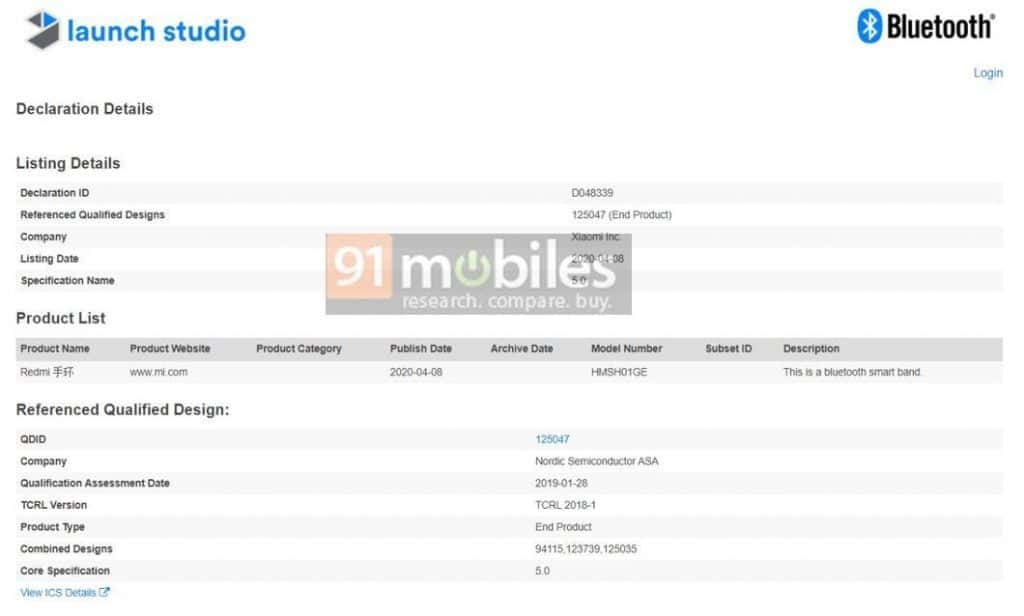 The wearable has now appeared on the Bluetooth certification with the model number HMSH01GE. For those who’re unaware, the same model number first surfaced on the BIS certification. As per the listing, the band will come with the latest Bluetooth 5.0 version. Since it has already been launched in China, we know everything about the product.

To recall, Xiaomi Redmi Band is equipped with a 1.08-inch colored display. It has a built-in heart rate sensor along with the ability to monitor various activities. The activities include sleep, running, walking, reminder and a lot more. In terms of battery, we’re looking at a solid 14-day battery life on a single charge. Instead of the dedicated cable, the wearable has a charger onboard that plugs into the USB-A port.

With the Redmi Band, the company will directly compete with the likes of the Realme Band and Honor Band.

With the BIS certification and appearance on Bluetooth SIG listing, it seems like Redmi Band will soon head over to the Indian market. Coming to the price, there is no information on the Indian pricing as of now. We should expect the wearable to come with under INR 1,500 price tag.