Vivo’s sub-brand iQOO will reveal a new smartphone on April 23 dubbed iQOO Neo 3. The company already released a flagship device earlier this year. However, it can’t be compared to what the iQOO Neo 3 is gearing to be. The handset will feature a 144Hz display and may also become the cheapest Snapdragon 865 smartphone to reach the market. The company keeps sharing details about the handset to keep the hype alive until the launch date. Now, it revealed that the smartphone will pack a Hi-Fi chip with a signal-to-noise ratio of 125dB. 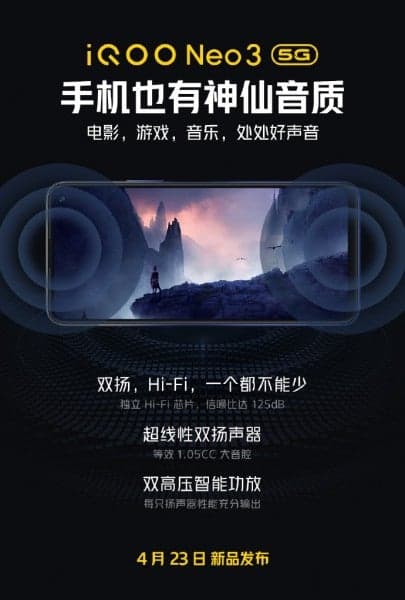 This particular feature will make media consumption much more enjoyable in this smartphone. Moreover, you can expect high-quality audio during your gaming sessions. Unfortunately, just a few details are known about the iQOO Neo 3. The handset will obviously come with Android 10 and gaming software features. After all, iQOO is a gaming brand.

On the front, the smartphone is said to feature a single punch-hole selfie, while on the back there’s a triple camera array sitting in a rectangular island. The handset will also pack 8GB of RAM and 256GB of UFS 3.1 storage. It’s said to support 44W fast-charging. However, we still have no details about the actual size of the battery, but we assume that it will be more than 4,000mAh.

More details may keep popping out from official and unofficial sources as the launch date comes near.