This morning, Chinese manufacturer, Meizu, released a set of official renders of the Meizu 17. The renders show the front design of this smartphone and it is consistent with other images that we have seen. The Meizu 17 comes with a single punch-hole screen and the display ratio is relatively high. It comes with ultra-thin bezels on all four sides but the bottom bezel seem thicker than the rest. Another point of focus is the white panel which is consistent with Meizu in recent times. Contrary to popular belief, this smartphone will not launch on April 22. However, the company will announce the launch date on April 22. 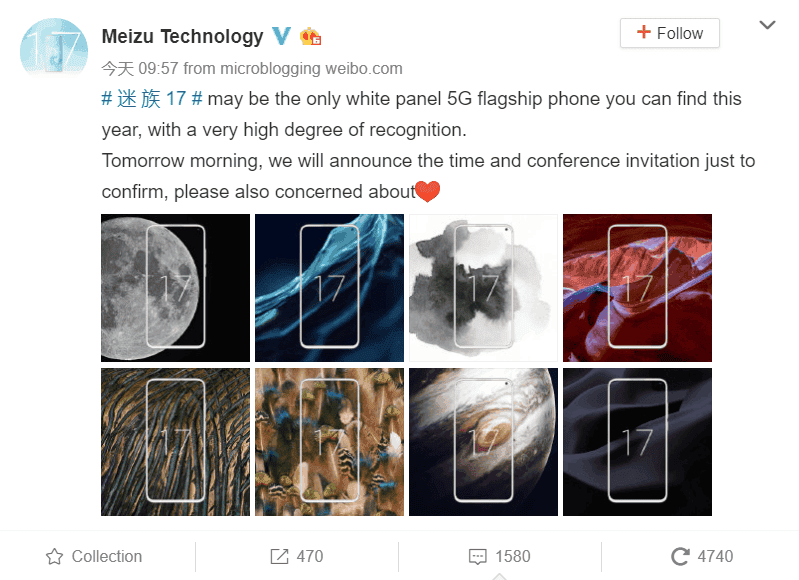 According to recent information, Meizu 17 will come with a Snapdragon 865 5G processor, LPDDR 5 memory, UFS 3.0 flash memory. Furthermore, the display is a 6.5-inch 90Hz AMOLED punch-hole screen with an optical on-screen fingerprint sensor. This smartphone comes with a quad-rear camera and a 4500 mAh large battery capacity. This device will use a 64MP Samsung GW1 main camera. Both Meizu 17 / Pro charging heads have passed 3C certification. The certification shows that the former supports 30W fast charging, and the latter 40W. It also comes with a horizontal linear motor, dual stereo speakers and other configurations.