After a long period without much “relevant” launches, Meizu is gearing to unveil a new smartphone series made of some of the most ambitious handsets for a long time. The new Meizu 17 series may be composed of a vanilla variant, a Meizu 17 Pro and Meizu 17T. During the past few weeks, several leaks have been taking the headlines along with the company’s own teasers.

Today, the company is once again using its Weibo account to tease one of the features coming with the highly-anticipated flagship. Apart from the camera, display, and chipsets, the new handsets will also include a new feature dubbed haptic engine 3.0. According to the Weibo post, it’s a new “engine 3.0 horizontal linear motor” while it’s hard to digest what this really means, it’s easy to assume that the company is teasing a new precise and powerful haptic vibration. 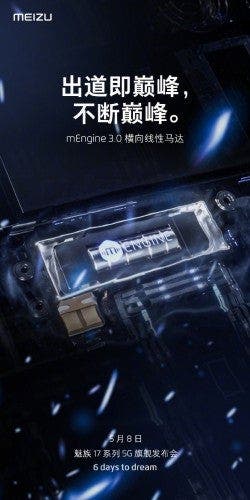 In the past, decent haptic feedback was something exclusive to the high-end models. However, it has been reaching more affordable handsets in the last two or so years. As the new feature suggests, Meizu is ready to jump in this trend with the Meizu 17 series. The handset is gearing up to be a solid offering with bezel-less 90Hz display, Quad-Camera setup, Fast-charging support, and powerful battery.

Unfortunately, we’re yet to see if this handset will be exclusive for the Chinese market. After all the company has been a little shy with Global releases. Meizu was once one of the most relevant Chinese players but lost space with the intense competition. The lack of proper software support also enraged users. Let’s see if the new 5G smartphone will be enough to reconquer the company’s fanbase.