Good news for all Oppo smartphone owners in Europe. The Chinese company has finally announced a schedule for ColorOS 7 and thus Android 10 for Europe. Almost all recent smartphones are to be supplied with the latest Android 10 version by summer.

A few months after Google released Android 10, Oppo announced its own new ColorOS 7 user interface based on it. The user interface is now significantly more minimalistic and has been expanded to include some useful functions such as cross-system dark mode and many more.

A little later there were the first beta tests for the OS and ColorOS has now appeared in a first, stable version for the models OPPO Reno 2 / Z, F11 / F11 Pro, A9 and R17. Oppo has even released the next version called ColorOS 7.1 for the Find-X2 series.

In Europe, however, many devices have not yet received the update, which should change shortly. Because the now published schedule (see below) provides that virtually all mentioned smartphones should be supplied with the new user interface by August 2020 at the latest. 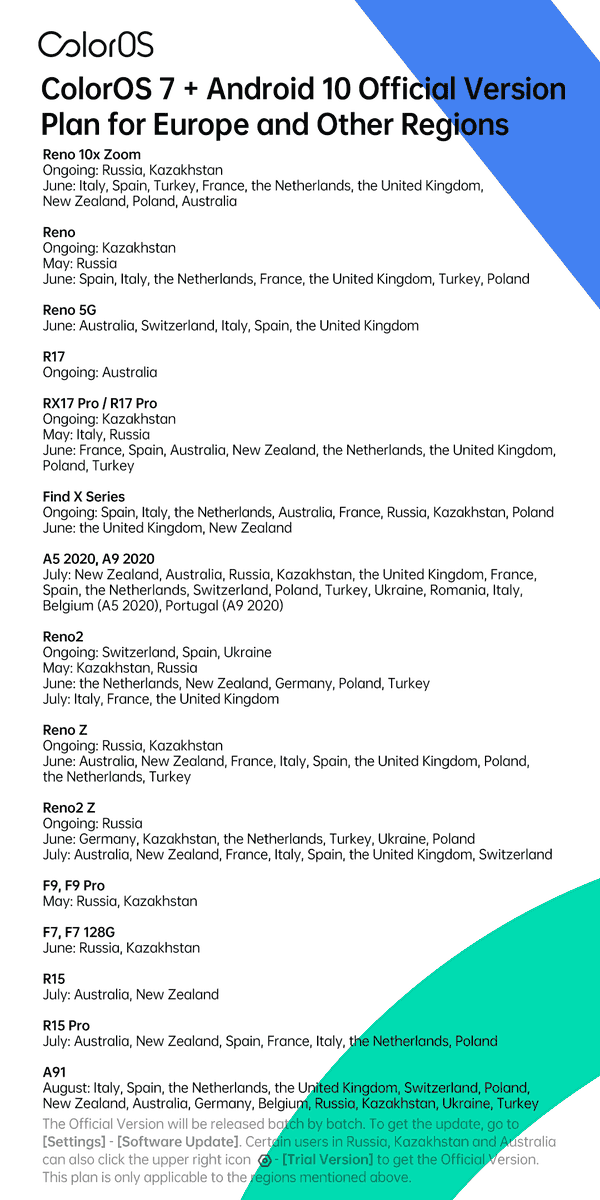 Oppo’s ColorOS currently supports 72 languages, covering more than 140 countries and regions. Over the past seven years, there has been good progress in ColorOS development. As of 2017, the ColorOS Software Store had a cumulative distribution of over 100 billion. ColorOS is currently on its 7th generation (ColorOS 7) which is currently rolling out in phases.

The new ColorOS 7.1 arrived with the Oppo Find X2 series, which brings the O1 super-sensing image quality to the 120Hz refresh rate screen. In addition, the new system comes with a smoother operation which improves its efficiency. ColorOS 7.1 also comes with a number of practical functions such as super text, call translation, recording to text, and so on.