On May 5, following the schedule, the Realme 6 Pro also officially opened an appointment to purchase after the Realme 6i and Realme 6 were launched in Europe for almost a month.

According to the reservation order page, the price of the Realme 6 Pro is 349 euros. And the order will include a pair of Realme Bubes 2 headphones.

As for the key features, the Realme 6 Pro uses a 6.6-inch FHD+ LCD dual-punch-hole full-screen with a refresh rate of 90 Hz, a touch sampling rate of 120 Hz, and a peak brightness of 450 nits. 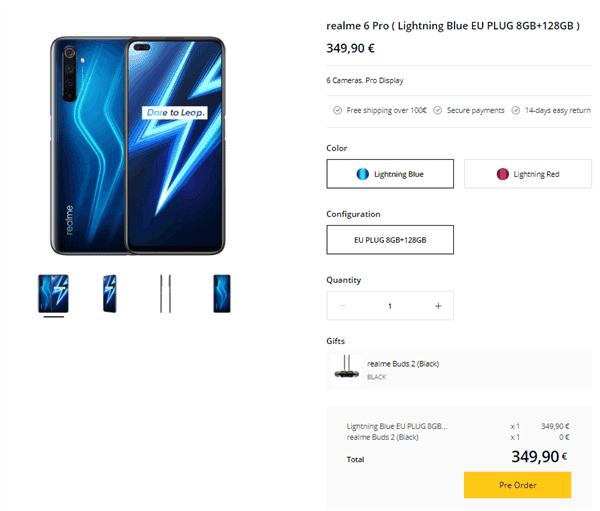 In terms of the core configuration, the Realme 6 Pro sports a Qualcomm Snapdragon 720G mobile platform (the world’s first). Also, it has an 8GB LPDDR4X memory and a 128GB UFS 2.1 flash storage. The back of the handset carries a 64MP camera, which is accompanied by an 8MP super-wide-angle, a 12MP telephoto lens, and a 2MP lens. The front-facing 16MP main camera is paired with an 8MP super wide-angle sensor. The battery capacity is 4300mAh, which supports the 30W flash charge.

In addition, the Realme 6 Pro uses a side fingerprint unlocking and supports NFC and Bluetooth 5.1. The card tray adopts a dual SIM card and one MicroSD card slot three card design.

The phone runs on the latest Android 10 operating system with Realme UI skin on top.

The pre-orders will start shipping on May 7. But the number of destinations is limited. It only will ship to Belgium, France, Luxembourg, the Netherlands, and Portugal.