This morning, Xiaomi router officially announced that Xiaomi’s second WiFi 6 router will be officially unveiled at 10 a.m. on May 13. According to Pan Jiutang, Xiaomi’s second WiFi 6 router uses an enterprise-grade 5-core processor. It also comes with an independent NPU and the latest 14nm manufacturing process in the industry. Furthermore, he said that “the performance and power consumption are very good, of course, the cost is not cheap…” 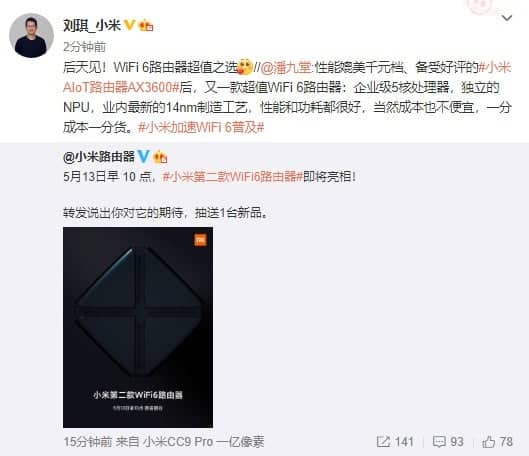 Xiaomi’s first Wi-Fi 6 router with 7 antennas hit the market last month for 599 yuan ($85). The Xiaomi router AX3600 is currently in stock and it is an AIoT Router. WiFi 6 is the new generation of WiFi standards. Compared with the previous generation, WiFi 5, the transmission rate, signal coverage, and data delay are much better. When users connect multiple terminal devices,  the WiFi 6 router can significantly reduce the number of terminals and performs as though it is dealing with a single equipment.

The Xiaomi’s first Wi-Fi 6 router comes with 7 antennas. Six of these antennas are external high-performance signal amplifiers (two 2.4Ghz antennas and four 5Ghz antennas) while the last antenna is an AIoT exclusive independent antenna. Liu Xinyu, general manager of Xiaomi’s intelligent hardware department, said that its signal can cover 2 football fields. This will simply eliminate the issue of “no-signal corners” in the home.

However, we expect the company’s second WiFi 6 router to be better but more expensive. We will have to wait a few more days to find out the price of this device.