AnTuTu benchmark platform has just released the global top 10 best performing flagship and mid-range phones for the month of April 2020. This is the ranking of the powerful Android smartphones that are sold outside of China. The first rating describes the situation in the flagship segment, and the second shows the rating of mid-range smartphones. 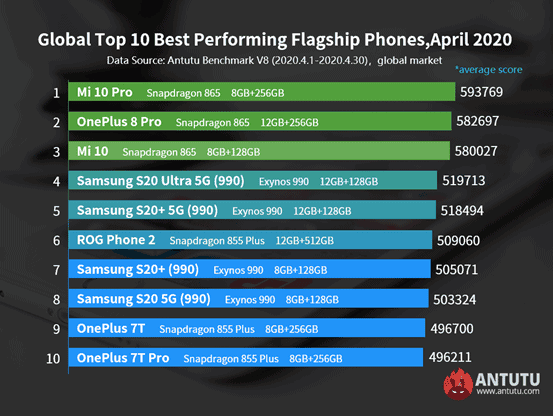 The most powerful flagship according to AnTuTu is the Xiaomi Mi 10 Pro in the 8/256 GB variant. The smartphone is gaining 593,769 points. The standard edition is located two lines below with 580,027 points. Mi 10 carries onboard half as much storage and the same amount of RAM. Between the two flagships of Xiaomi, the OnePlus 8 Pro is located in a 12/256 GB configuration. The benchmark awards it an average of 582 697 points. All three models run the Snapdragon 865 mobile processor.

Next in the top 10 are four flagships of Samsung, between which settled the gaming smartphone ASUS ROG Phone II. The fourth position is the Samsung Galaxy S20 Ultra 5G, and the line below is the Galaxy S20+ 5G. Both models are represented by the 12/128 GB variant and carry the proprietary Exynos 990 processor on board. The result was 519 713 points and 518 494 points respectively. 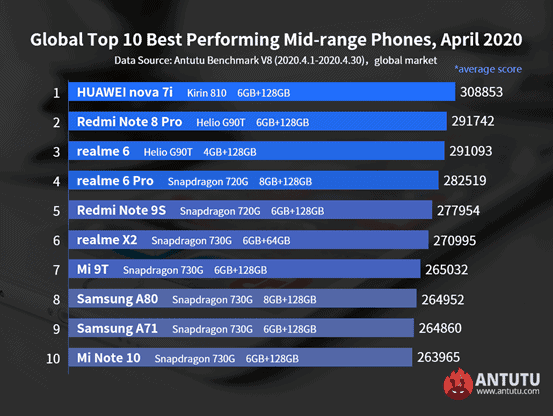 Next WhatsApp: video calls with 50 people soon thanks to Messenger Rooms