Realme is gearing up for its upcoming massive launch event where the company will announce a plethora of new devices. The launch event is scheduled for May 25 in China. The key highlight of the event is that the smartphone maker might end up launching eight different products covering a wide range of categories.

Realme Blade Runner to Launch on May 25 in China

Realme Blade Runner is the upcoming device that will steal the limelight. For those who’re unaware, Realme CMO Xu Qi Chase recently revealed its new upcoming product codenamed Blade Runner. Chase posted a photo of the device on Weibo social media platform. As per the image, Realme Blade Runner will arrive with quad-camera sensors positioned inside a vertical module. With reflecting grey colour, it seems like the device will feature a glass back. As you can see, the back of the device doesn’t feature any fingerprint sensor. 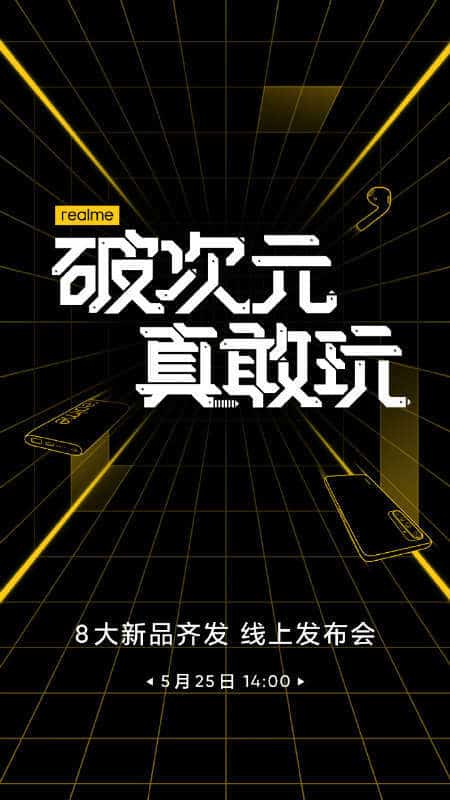 Apart from the live image of the phone, we also have a teaser poster that announced the upcoming launch event. The poster also suggests that the Blade Runner might feature an in-display fingerprint sensor. Furthermore, it also looks like the device will not feature a 3.5mm audio jack. Apart from this, we don’t have much information on the upcoming device. We are expecting Realme to tease more information in the coming days.

It is still unclear whether Realme Blade Runner will be the company’s next gaming smartphone or simply the Realme X3 SuperZoom.

As mentioned earlier, Realme is expected to launch eight products in its upcoming event. As per the poster, we should see a truly wireless earbud possibly Realme Buds Neo and a new power bank. We might see the latter featuring wireless charging support. Sadly, the poster teaser doesn’t reveal the other remaining products.

Considering Realme is supposed to launch its first smartwatch dubbed Realme Watch, we might see the same going online at the upcoming event. We might finally see the company’s first television lineup as well. It seems like the upcoming Realme event is going to be a massive one and we could not wait to hear more information on the product.