Xiaomi is reportedly working on yet another Redmi smartphone dubbed Redmi 10X. The device is slated to launch in China anytime soon. This is not the first time we’re hearing about the device. A couple of days ago, the device appeared on Google Play console listing revealing some key specs along the way. Well, the device has now made its way to the GeekBench for the benchmarking purposes. 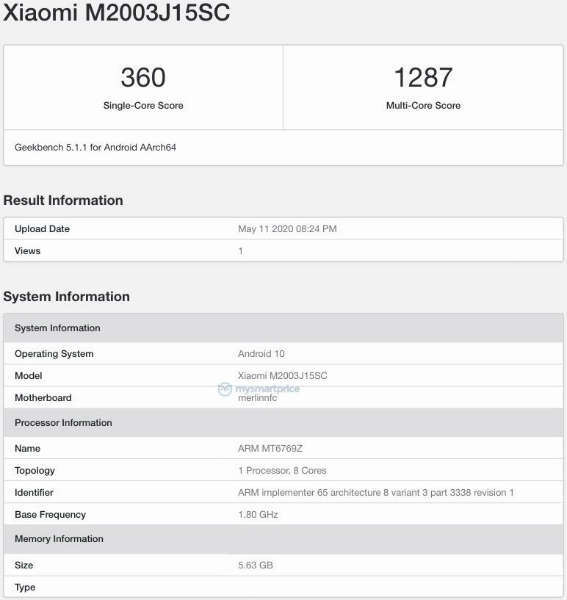 Xiaomi Redmi 10X has now surfaced on the GeekBench V5.1.1 with the model number M2003J15SC. As expected, the listing has revealed some key specs along the way. The device was spotted featuring 6GB RAM along with a MediaTek MT6769Z chipset with a base clock speed of 1.80 GHz. This is nothing but the Helio G70 chipset which also was mentioned in the Play console listing. In terms of software, we’re looking at the latest Android 10 OS under the hood.

Talking about the benchmark scores, the device managed to score 360 points in the single-core performance while it got 1287 score in multi-core testing. Considering previous leaks and rumours, the upcoming Redmi 10X will arrive with a 1080 x 2340 pixels resolution while the display size could be the 6.54-inches. The display will feature a punch-hole cutout on the top left corner for the front selfie camera. We should see quad-camera module having a 48MP primary sensor, an 8MP ultrawide lens and two 2MP sensors.

For selfies, there is going to be a 13MP front shooter. All of these will run on a 5,020mAh battery paired with fast charging support.

At the time of writing this, there is no concrete launch timeline for the smartphone. We should see more information on Redmi 10X in the coming days shedding light on more aspects. Whenever that happens, we will make sure to keep our readers updated.

Next Google Messages: you will soon be able to react to messages with emojis