After being rumoured for some time, concrete evidence of the existence of Redmi 10X has surfaced online this week. Earlier, the device had passed a few certifications. Now, a new report reveals that it has been listed on Google Play console with key specifications.

According to 91Mobiles, the Redmi 10X has been spotted on Google Play Console settings. It was earlier rumoured to be the rebranded version of the global Redmi Note 9 for the Chinese market, but the listing reveals modified specifications.

The listing shows the display resolution is reported as 2340×1080 which translates to a FHD+ screen, however, the screen size is not listed here. The design of this device is expected to be similar to the Global Redmi Note 9 as it already got listed on some retail sites in China. It is said to have a screen with a punch-hole on the top left corner. 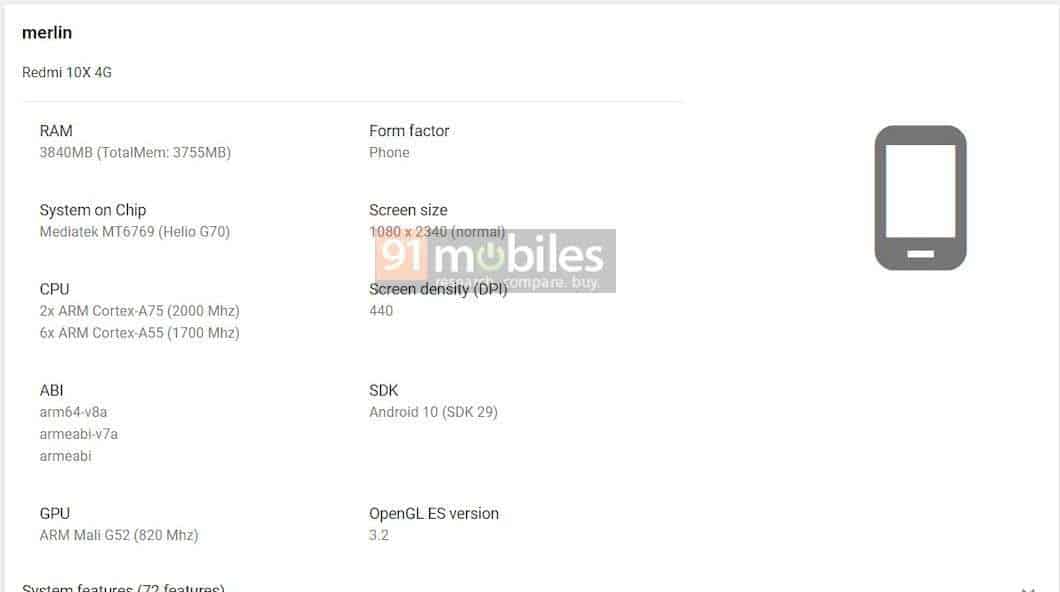 Further, the listing says the Redmi 10X will be powered by Mediatek Helio G70 SoC. It has 2 cortex A72 clocked at 2.0GHz and 6 cortex A55 clocked at 1.7GHz. This is a slight degrade from the G85 SoC that was found on Redmi Note 9. The graphic duties will be handled by Mali  G52 with a frequency of 820MHz.

Additionally, the model listed has a 4GB of RAM which seems acceptable as this device may be pushed to a budget audience. However, the model listed could very well be one variant and we can expect the final version to pack more RAM and storage variants.

Apart from this, the device is said to run on Android 10. Considering this a Redmi device, we can also expect it to run the latest MIUI 12  out of the box. There is no further information about the device and with the device getting listed, we won’t have to wait longer for its launch.