Microsoft continues to actively develop the Windows system for Linux (WSL) shell. At the Build 2020 conference, Microsoft announced the next step: support for GUI applications along with hardware acceleration. In the future, it will be possible to run GUI Linux applications in Windows. After adding a full-fledged Linux kernel as part of the WSL2 update (which is part of the Windows 10 May 2020 update) and tight integration of Windows 10 Explorer with Linux files, this step as a whole seems quite logical. But still, we did not expect such announcements.

This will be implemented without the need for X11 forwarding by Windows users. The innovation is primarily intended for developers to allow them to run the Linux Integrated Development Environment (IDE) along with regular Windows applications.

Microsoft is making Windows 10 more and more like Linux 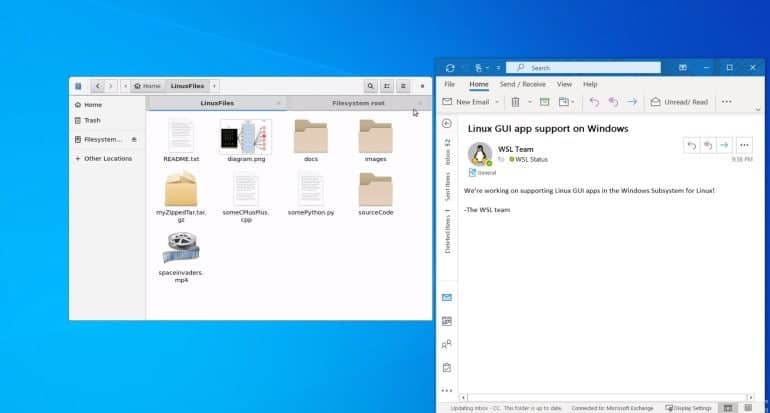 And although before that it was possible to run Linux GUI applications on Windows using a third-party X server, it was devoid of any practical meaning due to useless graphical performance. Microsoft promises to solve this problem. Windows 10 will soon get hardware GPU acceleration with Linux tools. This primarily relates to development scenarios, including parallel computing or machine learning and artificial intelligence models.

Hardware acceleration will be available in the Windows 10 Insiders Preview in the next few months. But the final version should arrive in the fall with the release of the Windows 10 Fall 2020 Update. As far as Linux application support is concerned, Microsoft promises to provide more details later this year.

Recall that WSL is an additional compatibility layer for running Linux applications on Windows 10. The first version of WSL was available in the Windows 10 Anniversary Update, which was available in August 2016. The new version of WSL2 focuses not so much on basic functionality as on performance. The new tool should significantly increase the speed of launch and operation of Linux-based applications, as well as significantly reduce the use of memory.

Microsoft previously separated the Linux kernel from Windows to update it separately through Windows Update. The company also promises to rebuild the WSL kernel after each release of a new stable version of the Linux kernel with a long support period, so that users always have the opportunity to take advantage of the latest innovations. The current long-term stable version of Linux is 5.4.