Vivo is gearing up to unveil its new Vivo X50 series. According to recent reports, the company will introduce the Vivo X50, Vivo X50 Pro, and X50 Lite on June 1. The icing of the cake surely is the X50 Pro variant which is set to come with a gimbal-like stabilization technology and Samsung’s newest 50MP ISOCELL GN1 camera module. According to a recent teaser from the company, the X50 Pro will be able to produce 100MP images. Today, a couple of sketches surfaced along with renders and promo shots for the referred device. It seems to be our best look in the device until now.

The first teaser, once again, is made of a short video that teases the gimbal-like stabilization technology coming with the X50 Pro. According to the popular leakster, Digital Chat Station, the company will place a custom Sony sensor on the phone’s Quad-Camera array. Interestingly enough, the front part of the handset is shown through a couple of new renders as well as the square-ish camera setup.

These renders are enough to give us a good look in the upcoming flagship. As usual, Vivo will stick with 2020 smartphone standards by adopting a curved display with a top-left aligned punch hole. Moving around to the back, we can see a square-ish camera sensor comprising four cameras. We can see an inscription teasing the zoom capabilities. Moreover, the handset has an unconventional triple-LED flash.

The Vivo X50 also made an appearance on the latest leak 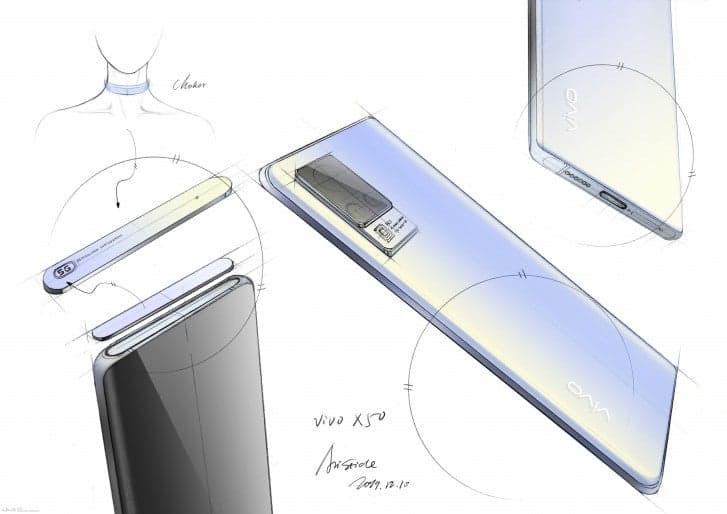 In addition to the new images, today’s leak also brought us a nice sketch of the vanilla Vivo X50 showing the handset in all angles. We can spot the USB-C port at the bottom along with the speaker grill. On the top, there is a 5G logo confirming the availability of the new connectivity standard. It sits alongside what seems to be a noise-canceling microphone. Moreover, the handset has a more conventional camera layout. Apparently it keeps the periscope module for advanced zoom capabilities.

The two handsets will go official on June 1. Until then, we believe that the company will keep its promo campaign to build the hype. As far as the hardware is concerned, we could see the X50 Pro featuring Snapdragon 865, while the vanilla edition might come with the Snapdragon 765G. Unless that the company decides to adopt a partnership with MediaTek and its immensity lineup in the new X50 series. We’ll probably have teasers regarding performance in the coming days.

Next Microsoft is making Windows 10 more and more like Linux