The annual mobile customer satisfaction survey has ended, giving us an overview of what customers liked the most. Apple has achieved an 82 score on the US Customer Satisfaction Index (ACSI), more than 1% over the previous year and higher than Samsung score of 81 this year.

The report also claims that Apple customers are more satisfied with the device’s battery life in 2020 compared to the previous year. LG took third place with a score of 79, while Motorola ranked fourth with a score of 77.

However, among individual smartphones, Samsung still surpassed Apple. The company’s Galaxy Note 9 was ranked in first place with 85 in customer satisfaction index. Apple’s closest device is the iPhone XS max at No. 4 with an 84 score, on par with the Galaxy S9+ and S10 models. 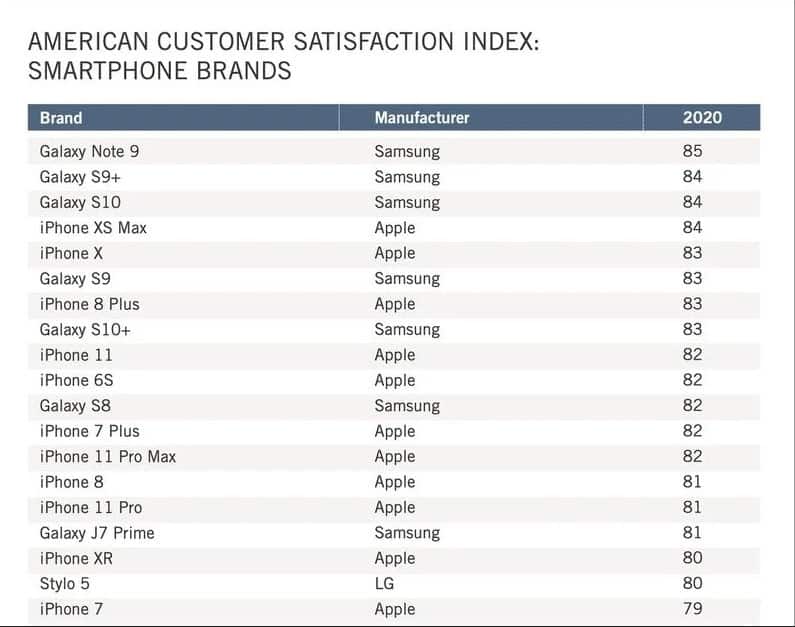 According to the ASCI report, the overall customer satisfaction index for mobile phones has increased by 1.3% from the previous year. That’s despite the fact that global smartphone sales have dropped 1% throughout 2019.

Apple receives the most satisfaction from users 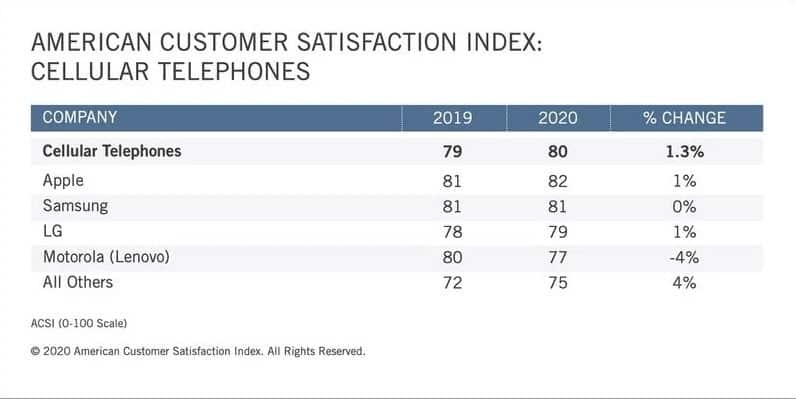 ASCI also ranks carriers in the US, with this year’s customer satisfaction index unchanged from the year before. T-Mobile came in at No. 1, then we have Verizon, AT&T, US. Cellular and Sprint.

ASCI Report is an annual ranking of overall satisfaction of smartphone customers and carriers. This year’s report is based on interviews with 27,346 customers in the US between March 20, 2020 and April 15, 2019.

Regarding Apple, it is worth to mention that recently, the security of a terrorist’s iPhone 5 and iPhone 7 was eventually circumvented by the FBI. They claim to have access to the two phones content bypassing the encryption.

According to the US Attorney General William Barr, the FBI was able to bypass Apple’s protections. Thus, discovering that the terrorist was in contact with Al-Qaeda organization.

As a reminder, he killed three American sailors at Naval Air Station Pensacola in California in December and injured eight others. He was a member of the Saudi military and was on an internship in the United States. He was 21 years old.

Trump administration has asked Apple to unlock the iPhone last January, but the manufacturer refused. Locked iPhones are encrypted and Apple has no way of accessing content. The FBI has then created a whole new system that bypasses the security of iOS. And it looks that they succeeded indeed.