Earlier this morning, a large number of users reported on Chinese social Weibo that their Samsung smartphones were crashing with black screens, garbled characters and infinite restarts. Just now, Samsung officially responded that it has received the feedback from users about the OS issues. Adding that the cause is being actively investigated and corresponding solutions will be provided as soon as possible.

Going to the official response, Samsung’s Chinese account commented on Weibo that:

Dear Samsung mobile phone users, we have received feedback from some users on system problems. At present, we are actively investigating the reasons and will be providing corresponding solutions as soon as possible.Samsung

Later on, some Chinese bloggers reported that some Samsung phones’ operating systems crashed today due to a bug in the old version of the lock screen app caused by the Chinese calendar; going back to April 2020.

Basically, today is Chinese’s first day of the four fourth lunar month of April. So, if the Calendar App is not updated in time, it may cause the system to calculate the time incorrectly; causing system bugs and crashes. 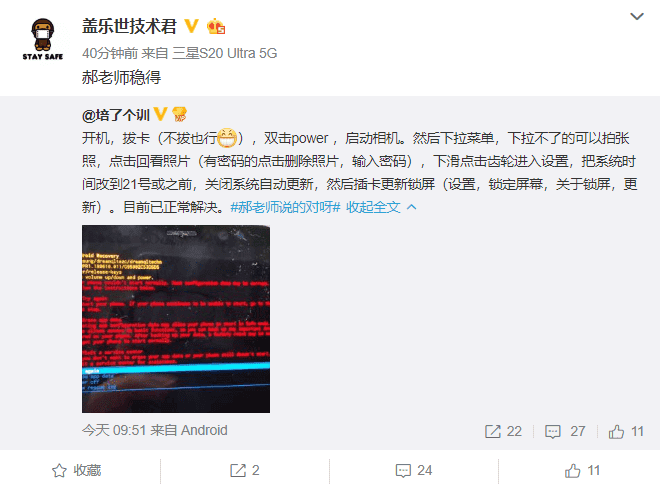 What can you do if you’re affected by the problem? Well, according to some users you can back up your data and do one of the two steps:

1. Update the Calendar App in the system App in time;

2. Temporarily turn off the automatic update via WLAN option in the system update.

Another blogger shared a solution to fix the Samsung phone crash. He suggests to restart the phone, double-click the power button to enter the photo interface. After that, pull down the notification bar, click the settings button, search for the time and change the date to one month earlier. He confirms this works and then suggest to just wait for the official fix.

So, once again: double-click power to start the camera, pull down the menu, if you can’t pull down, you can take a photo, click to see the photo (click to delete the photo with a password, enter the password), slide down and click the gear icon to enter the settings, change the system time to after or before May 21st, turn off the automatic date update for the lock screen.

Did any of you experience this problem? Did this fix work for you? Let us know down below!

Next Motorola One Fusion+ specifications and launch date confirmed