In May last year, Xiaomi Youpin released the Mi Laser TV 4K Cinema at a price of 10,999 yuan ($1534). It came with the slogan ‘100-inch TV, 1/10 price’. Also, the platform emphasized that the product can allow people with small apartments to have a 4K laser giant-screen-size home theater. After a lapse of one year, the newly upgraded Fengmi Laser TV 4K Cinema Pro was officially released. It is currently available for sale in Xiaomi, priced at 12,799 yuan ($1785).

It supports 4K resolution (4 times the resolution of 1080P). And 150-inch giant screen still shows sharp and clear pictures. Using an Amlogic high-performance chip T972, the highest frequency is 1.9GHz. Compared with the previous generation projection chip T962, the performance improvement is 63%. But it has also reduced power consumption by 55%. This is also the first chip of the manufacturer to support 8K video decoding. 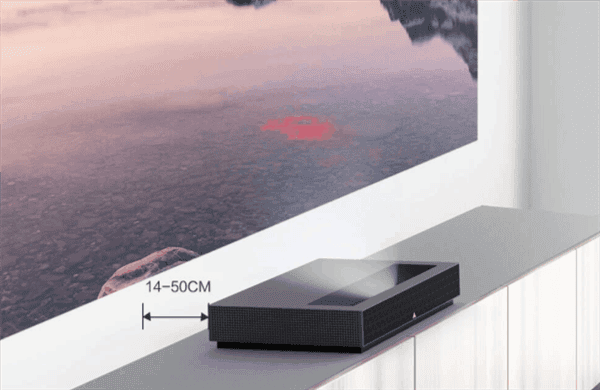 At the same time, the Fengmi Laser TV 4K Cinema Pro comes with a 3GB DDR4 memory. It guarantees to play large games, to watch high-definition video, and other ‘heavy’-use scenarios with no pressure. Three HDMI 2.0b interfaces can be used to connect hard disk players, flash drives, game consoles, computers, etc.

The Fengmi Laser TV 4K Cinema Pro uses a 0.23:1 large depth of field ultra-short-focus lens design. Thus, it can be placed on a TV cabinet to project a large screen of 80-150 inches. Using the new light peak technology ALPD° 3.0 laser fluorescent display technology (up to 16-18% red light ratio), the character and natural color reproduction is more realistic. The service life of the light source is more than 25,000 hours. Say, you can watch more than 10,000 movies.