The news feed is quite hectic for the upcoming Galaxy M01. The handset will join the Galaxy A01 as Samsung’s most budget offering. Today, the pricing for the Indian market has leaked revealing an INR 9,000 price tag, now specs and dimensions have been provided by the folks over at Android Pure. The drawing is basically what we expect from a quick start guide containing some information about the handset. Thankfully it provides the dimensions and device’s specifications.

The handset has the very same chipset as the Galaxy A01 – The Snapdragon 439. It’s a dated chipset, and we would certainly prefer the MediaTek’s Helio G70, but it should still provide acceptable performance for non-demanding users. The processing power comes along with 3GB of RAM and 32GB of Internal Storage. 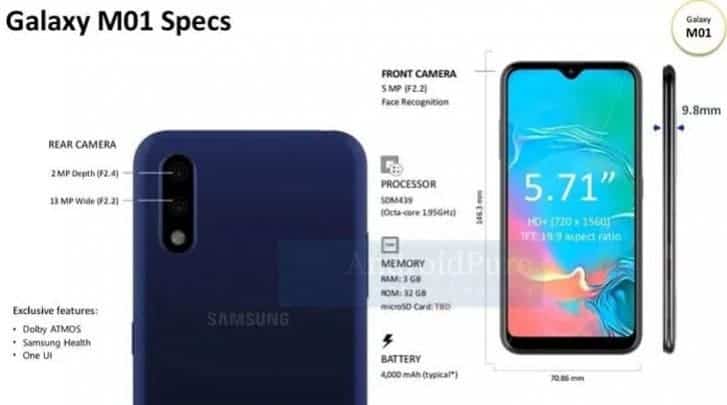 The phone has 146.3 x 70.86 x 9.8 mm overall dimensions. It ships with Android 10 straight out of the box with One UI 2.0. A 4,000mAh battery will keep the light on. Other features include Dolby Atmos, Samsung Health support, and Face Unlock. Interestingly enough the microSD presence is listed as “TBD”. Perhaps the schematics are still work-in-progress, or in the worst-case scenario, the material was manipulated.

The Galaxy M01 will start the ladder of the M-series with a quite affordable price tag of INR 9,000 (~$118) in India. It’s not the better of budget smartphones, especially in India where other devices like the Realme C3 are available. Let’s see how the M01 will perform in emerging markets. Worth noting that in India, the handset will arrive in June alongside the Galaxy M11.

Next HBO Max now available for Android, Android TV and other platforms, costs $14.99 per month