Recently, at hacker forums and sites of similar subjects, the number of offers of compromised accounts belonging to users of the largest video streaming platform YouTube has significantly increased.

The cybercriminals are offering huge lists of login data, backed up by the number of subscribers to each account.

YouTube: Hundreds of hacked accounts are on sale on the dark web

The hackers has long understood the value of hacking YouTube channels. Such attacks primarily allow them to gain a new audience, where they can try out a number of fraudulent schemes or malicious advertising campaigns.

In addition, there are other uses. For example, some attackers hack YouTube channels and then demand money from the former owner. If a person had a decent number of subscribers and makes money using the video platform, he would most likely pay.

Therefore, in principle, there is nothing surprising in the conclusions of researchers from IntSights, whose report claims that hacker sites have flooded with offers to sell hacked YouTube accounts.

The price, of course, depends on the number of subscribers, since it is this value that can be converted into money. For example, a starting price for a channel with 200,000 subscribers is approximately $1,000.

As for the methods of hacking channels, here most often the attackers resort to social engineering. Cybercriminals trick channel owners into downloading and installing malware. 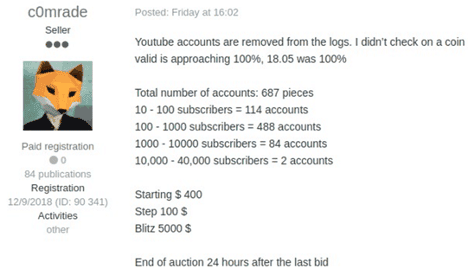 YouTube: chapters on videos are finally available to everyone

The team of the popular YouTube video service has announced the launch of a new feature that will delight fans of watching long videos. We are talking about the “chapters” into which you can now divide the lengthy video. To create chapter breaks, the video creator will need to specify timestamps in the video description. As a result, when viewing, clearly visible sections appear directly on the player slider. When dividing into chapters, you must create at least three sections lasting at least 10 seconds.

This feature has long been requested by both viewers and creators. Previously, its semblance was implemented independently by the creators of the videos. They manually prescribed the “table of contents” in the description. But such thing was rare, and this approach did not work very conveniently. The developers noted that they heard the users and implemented the chapters on an official basis. In April, testing of the function began among a small number of users. And now, the function became available to everyone.

Next Facebook now lets everyone export media to Google Photos